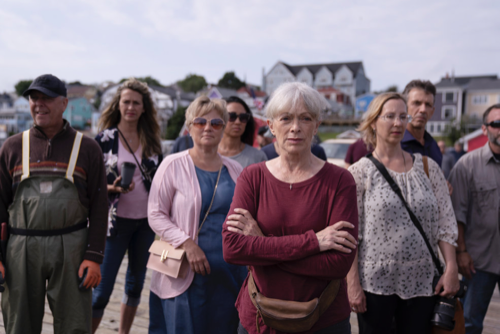 Tonight on the USA Network their new drama The Sinner premieres with an all-new Wednesday, November 17, 2021, and we have your The Sinner recap below. On tonight’s The Sinner season 4 episode 6 “Part VI” as per the USA Network synopsis, “A shocking new crime further rattles the town of Clark Harbor; Ambrose and Meg team together.”

Tonight’s The Sinner episode begins with Meg down by the water, Brandon is dead, Harry puts on gloves to examine the body. In his pocket, is a package of gum, homicide is on the way. Harry looks over at the crowd and sees Meg. Later, Harry and Meg have coffee, she talks about Brandon and says this is going to break his mother. There are some fisherman staring at Harry and he asks Meg what their problem is.

She tells him to forget about them, they are supersticious fisherman and think he brought bad luck. He tells her that he found a pack of nicotine gum on Brandon, same brand that was near Percy on the beach. He asks if they had any problems recently, she says he still had feelings for her, she broke it off suddenly. Harry wants to talk to the family before the Portland authorities get there.

Mike is being questioned why he was out early, he says he went out to make a good start. Harry walks into the station and is surprised to see that the police are going after Mike Lam. An officer says they know by his GPS that he crossed paths with Brandon. Harry walks in and says they have the wrong guy, he says Brandon was shot at close range, probably a 22 in the back of the head, that is a premeditated act. Harry’s bursting in and meddling in front of a Portland officer gets him thrown off the case.

Harry goes to see Brandon’s family, his mother says he was an honest man and never in trouble. Harry asks why he was out late at night without a crew. Meg tells his mother that Brandon and Percy were together the night she disappeared, they had some type of disagreement. His mother gets angry and tells Meg to get the hell out of her house.

Meg is home and she tells Colin that Brandon had an argument with Percy and they are on tape together the night she died. Colin tells her that they are just going to have to face that they may never find out what happened to Percy. And, the person who came back from the Mainland wasn’t their Percy anymore and she knows it. Meg gets up and walks out of the room. In the dining room, she stairs at the chair that Percy would sit at.

She thinks back to a conversation one day at dinner where Colin said that the guys coming from the coast they don’t play nice, they are dangerous. Meg says it is there waters. Percy says the waters are not theirs, there were people already there before their family came from Ireland. In fact, she says they stole the waters, they pillaged, there were people living in nature and didn’t care about money. Meg asks Percy what is wrong with her.

Harry goes to speak to one of Brandon’s employees and asks if he crewed with him last night, he says no. Then he asks if he knew Brandon was having an affair. The guy doesn’t want to answer questions, Harry tells him Portland police are there and they are going to come after him, he just wants to get information and hopefully close this down.

A couple of weeks ago he got a call from Brandon, he had a girl in the car and said that she had an accident, she slipped. Brandon tells him to tell nobody about this, he hand the guy money to buy his silence. He couldn’t tell if she was around there but she looks scared. She had a piece of rusted metal from a boat in her foot. Someone else showed up, it was Percy. Brandon hopped in the car with the girl and took off before Percy could speak to him. He doesn’t know the woman’s name, he says she was too scared to speak.

Meg goes to see Lou and she tells him there is a connection between Percy’s death and Brandons, he needs to look into it. CJ is at the station, he wants to speak to Harry about Brandon, Moore tells him that nothing he can say will change anything. CJ says his father is innocent, he storms off. Meg sees the whole thing and she follows CJ outside. Meg tells him she is sorry about being wrong about him and his involvement in Percy’s death. He tells her that he loved her and would never hurt her. CJ asks her who Brandon was meeting early mornings down by the pier, a boat off island. Every two weeks ago he and his father saw it and her sons know everything that Brandon was doing, so he says she must be involved too.

He started following Brandon to see what he was up to, after all the stuff they had done to his family, he thought he could use it against him. He followed Brandon to the disposal area, he met up with these two guys, they beat him and told him to shut it down like they already warned him. It is the same two guys that Brandon was meeting at the docks. Harry goes back down to the shipyard and looks around, he takes a cover off a boat and finds out that the boat is named Valerie. Harry starts to nose around inside and there is a horrible stench, he covers his nose.

Meg goes to see Don and confronts him about Brandon and what he was doing at the shipyard. He says that Brandon just had a wondering eye and it was a quiet place. He tells her to forget about it, that is what he did.

Harry calls Meg and tells her there is something out there. All of a sudden, someone starts shooting at Harry. He runs for his life with men running after him with their guns. Harry is alone, the men are gone and it is dark. Percy’s ghost haunts him again, she tells him that nothing will make up for what happened to Jamie.

Percy is gone. Harry had a knife, the men are still look for him. Somehow, Harry manages to tackle one of the men and makes a run for it. Meg shows up, he tells her found something and men are after him. He gets in the car and they leave. Meanwhile, Sean makes a call, he says she brought him there, what does he do. Then we see Valerie set on fire.