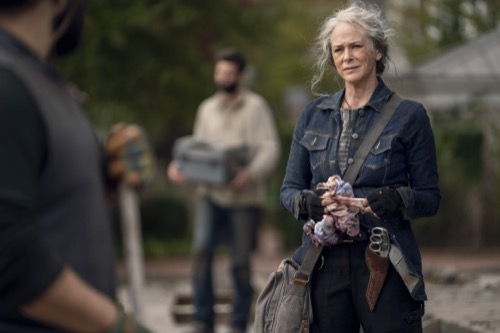 Tonight on AMC our favorite show The Walking Dead airs on an all-new Sunday, March 28, 2020, episode and we have your The Walking Dead recap below. On tonight’s The Walking Dead Season 10, Episode 21  called, “Diverged,” as per the AMC synopsis, “At the lowest point in their friendship, Daryl and Carol come to a fork in the road and head their separate ways.

Carol returns to Alexandria, while Daryl stays on the road, each going into their own type of survival mode.”

The episode begins with Carol and Daryl, who are walking through the forest with Dog. The stop for water, for all three of them. He asks her if she wants a ride, his bike is up ahead, she says no, she is good. He tells her good luck; she says the same to him and at the fork in the road, they separate.

Daryl finds his bike; Dog goes with Carol and it’s not long before they are back home. Carol finds a bloodied shirt on the ground and wonders about it. She tells Dog to follow her, she wants to get home. She gives Dog water and then complains about Daryl, she says she doesn’t need an apology, it doesn’t solve anything.

The next day, Carol is happy to be back at Alexandria. She goes outside to see if she can offer some help. She asks Jerry to give her something to do. He tells her the solar panels are messed up because of the whisperers and they had to throw out a lot of grain because of rats. She says he is going to make some soup; she can always find things to put into a soup. Then she tells him a story about stone soup and how a whole village came together to make soup.

Daryl’s bike stops, he gets up and takes a look and it appears he lost his fuel.

Carol goes into the kitchen and starts to look around. She then has a few ingredients and starts to slice them up until she hears Dog growling and barking, she heads to see what is bothering him. She sees rat droppings on the floor and tells Dog she hears it too. Dog runs into the other room; he is sniffing everywhere to find that rat. Carol makes a homemade rat trap to catch the rat.

Carol goes out into the woods to see if she can find more ingredients for her soup. All of a sudden, walkers are coming from every angle. She says out loud, “think I can’t take you myself,” and she goes after them one by one. Carol kills them all, picks up her bucket, and hums all the way back home.

Carol returns home, blood all over her and Jerry asks her what happened, she says nothing, got some dandelion greens and they are super nutritious.

Carol is trying to fix the solar system, Jerry tells her to let him know if she needs anything. Carol fixed it, she has power in the house. Meanwhile, Daryl is walking with his bike, he comes to a hill and train tracks, some walkers are ahead. He takes out his binoculars to see how many, grans his bow, and gets to kill them.

Daryl steps on a branch, which alerts the walkers and they all start coming after him. He starts walking faster, he goes to drop down in a clearing where there is a walker in army gear and he slips, loses his footing, and is almost a goner. He grabs all the supplies and leaves. Back to Carol, she is still working on her soup. She tells Dog that if he is good, she will give him some. Then, Carol goes to her rat trap, and she did catch him, but he gets loose and she starts to chase it all over the kitchen with Dog watching her. They head to bed, she tells Dog that she knows he misses him, but he will be back. Then she asks him if she should leave and get out of everyone’s hair.

It is late, Dog is trying to wake up Carol, she gets up and reaches for her flashlight. Then we see Daryl, he finally gets his bike to work and he is on the road. Carol lets Dog lead her downstairs, next we see Carol breaking down a wall with her bare hands. She stops and sits down, dog lays beside her.

Carol is sweeping up in the kitchen when Jerry knocks on the door, he says he is there to check on her. She asks him if he can’t just let people like her suffer in peace. She admits that yesterday wasn’t her best day, it was a bad day. Jerry sees the walls busted up. Jerry leans out and hugs her, then we see the rat leave the kitchen. She invites him in and tells him that the soup is almost ready. Daryl returns to Alexandria. Dog goes running outside, Carol goes to see what it is, and it’s Daryl. She asks him what the heck happened to him, he says he was just about to ask her the same thing. Dog follows Daryl who says he is beat and going to hit the sack.