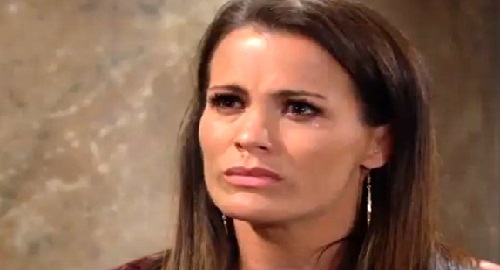 The Young and the Restless (Y&R) spoilers tease that Chelsea Lawson (Melissa Claire Egan) could go to kidnapping extremes to get rid of Sally Spectra (Courtney Hope). Will Chelsea take a page out of Adam Newman’s (Mark Grossman) old playbook?

Y&R fans will recall how Adam went too far by having Chelsea abducted. Adam was desperate to keep a deadly scheme against the Newmans in play, so he held Chelsea hostage. Adam thankfully found a saner, more normal path forward as a character, but now it’s Chelsea who can’t be trusted.

Chelsea never truly got the help she needed after poisoning Rey Rosales (Jordi Vilasuso) and trying to pin it on Adam. If Chelsea would do that, she’d certainly resort to kidnapping Sally to get her out of the picture.

Chelsea just might be willing to take that step depending on how things play out after her return starting December 14. She’s still jealous, possessive and somewhat unhinged, so she’ll definitely be returning as a schemer.

In fact, The Young and the Restless spoilers say Chelsea’s comeback arc will hinge on whether or not she’s truly on a better path. The goal is to keep viewers guessing regarding Chelsea’s mental health and how far she’s willing to go, so the answer is probably pretty far!

It’s easy to imagine Chelsea feeling threatened by Sally and trying every trick she can to send her packing. Since Sally is such a determined force to be reckoned with, she clearly isn’t going anywhere – not willingly anyway.

Chelsea may find there’s only one solution to her Sally problem. There could easily be a kidnapping twist where Chelsea locks Sally up and pretends she simply left town. Y&R’s going to need a new mystery for the characters to solve, so this could be a juicy one that ends with Adam’s romantic rescue of Sally.

There’s no guarantee that’s how the story will play out, but it makes sense considering Sally doesn’t back down from a fight and Chelsea will still be somewhat unhinged upon her return. It seems like the perfect kidnapping storm, so Sally could find herself locked up away from Adam and the life she’s built in Genoa City!

As other news comes in, we’ll pass along updates. The Young and the Restless spoilers say Sally isn’t as done with Adam as she claims to be, so it’ll be interesting to see Chelsea’s next dangerous move against her. CDL’s where you want to be for sizzling soap spoilers, updates and news, so make us your go-to source.