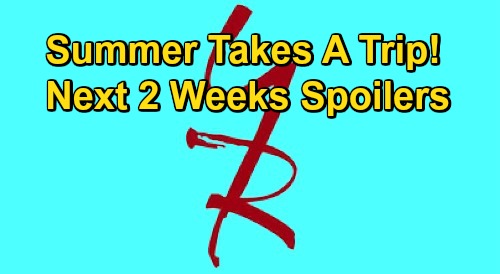 The Young and the Restless (Y&R) spoilers for the next two weeks tease that some sneaky plans are brewing. During the week of January 4-8, Phyllis Summers (Michelle Stafford) will try to convince Kevin Fisher (Greg Rikaart) to hand over the thumb drive that could take Victoria Newman (Amelia Heinle) down.

The information on that thumb drive proves Newman Enterprises embezzlement has been going on while Victoria’s in charge. That’s not a good look for the company – and Victor Newman (Eric Braeden) certainly wouldn’t be pleased by the news!

However, Kevin will refuse to give Phyllis this leverage – at least initially. Phyllis will offer to pay Kevin handsomely in return, but he’ll insist there’s no deal. From there, Phyllis may have to get a bit more creative to get her hands on what she needs.

In the meantime, Billy Abbott (Jason Thompson) will do some scheming as well. Kyle Abbott’s (Michael Mealor) plan will be derailed when Billy swoops in and makes a mess for personal gain.

As for Summer Newman (Hunter King), it looks like she’ll find herself at odds with Jack Abbott (Peter Bergman) – and Sally Spectra (Courtney Hope) will be at the center of the conflict. Jack will inevitably argue with Summer about whether Sally’s really been trying to undermine her.

Since Sally acted like Theo Vanderway (Tyler Johnson) was just stirring the pot, that’s what Jack will want Summer to believe, too. Summer should be frustrated when she realizes Sally has duped Jack and made him think she’s Little Miss Wonderful.

Summer will determine that a trip to Los Angeles is necessary if she wants to truly understand Sally’s history and use it against her. The Bold and the Beautiful will likely welcome Summer and maybe even Kyle as well for an exciting crossover story, so that’s something to stay tuned for.

Next, let’s talk about Nate Hastings (Sean Dominic) and Elena Dawson (Brytni Sarpy). The Young and the Restless spoilers say Elena will move past her reluctance with Nate, so they’ll get hot and heavy again.

Later, Elena will bump into Devon Hamilton (Bryton James) and let him know she’s sorry, but she’s moving on with her life.

Devon and Elena will wish each other the best, but neither one of them will seem as ready as they claim to move forward! This encounter will stir up some old feelings for Elena and Devon, so both of them will remain torn.

Nevertheless, Devon will also be there for Amanda Sinclair (Mishael Morgan) in the week ahead. Amanda will ask her birth mother, Naya Benedict (Ptosha Storey), to meet her over the phone. That’ll lead to Amanda getting quite emotional and leaning on Devon after such a tough conversation.

Whether Naya agrees immediately or not, Amanda will have a lot of things to work through. She should count herself lucky that she’s got Devon in her corner on this.

Over with Victor Newman (Eric Braeden), he’ll step up to make sure Adam Newman (Mark Grossman) can see ailing Chelsea Lawson (Melissa Claire Egan) following her stroke. It looks like Adam will be allowed in Chelsea’s room for a heartbreaking visit.

Chelsea won’t be able to speak or use her right side, so it’ll be hard for Adam to see her in such bad shape – especially since he’ll feel responsible. Even so, The Young and the Restless spoilers say Adam will play the blame game later and hurl accusations at Billy.

Adam will think Billy caused all this drama by targeting him with the exposé at Chancellor Communications. That led to Adam’s power outage, Chelsea’s fall and now her dire condition. Billy will think it’s typical of Adam to hold others responsible for his own actions, so a serious confrontation is on the way.

As for Sharon Newman (Sharon Case), she’ll have a difficult time cutting Adam loose. Despite Sharon’s new marriage to Rey Rosales (Jordi Vilasuso), Adam will still be on Sharon’s mind as he copes with his latest crisis.

During the week of January 11-15, The Young and the Restless spoilers say Phyllis will hit the jackpot. One way or another, Phyllis will get her hands on the ammo she needs to bring Victoria down.

Meanwhile, Amanda will get some surprising updates on her past. It sounds like Naya will eventually accept Amanda’s meeting request and could have a stunning story to tell her bio daughter.

Other Y&R spoilers state that Kyle will fume over Billy’s daring move. Billy will take a gamble and potentially win big against Kyle, so that’ll reignite their war and cause plenty of Abbott family trouble.

As for Nikki Newman (Melody Thomas Scott), she’ll feel the need to intervene. Nikki will step up to handle things herself, so this could involve Victoria and Nick Newman’s (Joshua Morrow) escalating conflict. If Nick and Victoria’s battle over Phyllis spirals out of control, Nikki may insist enough is enough!