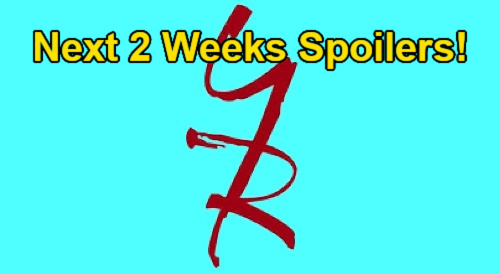 The Young and the Restless (Y&R) spoilers for the next two weeks, August 30 to September 10, tease that Victor Newman (Eric Braeden) will warn Adam Newman (Mark Grossman) off Sally Spectra (Courtney) while Jack Abbott (Peter Bergman) faces what may be a jealous dilemma. Victoria Newman (Amelia Heinle) will also lose it on Billy Abbott (Jason Thompson), so here’s what viewers can look forward to.

During the week of August 30-September 3, the Newman Media launch party will get underway. Sally will accompany Adam as we see the first signs of a true romance between them.

However, Y&R spoilers say Sally’s feud with Phyllis Summers (Michelle Stafford) will continue to make waves. Look for Phyllis to grab an ice bucket and take great pleasure in dumping it over Sally’s head at the bash!

As for Chelsea Lawson (Melissa Claire Egan), she won’t trust Sally at all.

Chelsea won’t even be certain she wants to take the job she’s been offered with the online fashion platform, so Chloe Mitchell (Elizabeth Hendrickson) won’t be happy about her bestie bailing on that idea.

Meanwhile, Victoria will fight back against the Ashland Locke (Richard Burgi) wedding naysayers. She knows Billy isn’t on board and will apparently blame Lily Winters (Christel Khalil) for letting her man try to stir up pre-wedding trouble.

Victoria will also blast Nick Newman (Joshua Morrow) for his own Ashland concerns, but Victoria seems to have some of her own deep down.

Later, Victor will gear up for a showdown with Billy and will hope to lay down the law when it comes to interfering in Victoria’s life.

As for Devon Hamilton (Bryton James), he’ll share a secret with Amanda Sinclair (Mishael Morgan and hear her secret in return.

We know Devon will feel an overwhelming connection to Abby Newman-Abbott-Chancellor’s (Melissa Ordway) baby, which he donated the sperm to make. Devon is this child’s biological father, so it’s understandable that he’d feel a deep bond.

Unfortunately, Devon may admit that bond is perhaps deeper than it should be considering Chance Chancellor (last played by Donny Boaz) is all set to be an adoptive dad.

Amanda’s confession will likely be related to her past and family, so Devon will listen and grow closer to her in the process.

We’ll see Mariah’s past experiences haunt her, so she may have a hard time shaking those moments when it was just the two of them in captivity – just Mariah and Bowie.

During the week of September 6-10, Nate Hastings (Sean Dominic) will get a request he didn’t see coming.

Elena Dawson (Brytni Sarpy) may relent on the idea of preferential treatment since she’ll likely accept the Ask MD Now job and need some extra time.

Nate will be in the position to give that to Elena if he reworks her schedule for her.

Will Jack open up about Sally and how he feels in the aftermath of her date with Adam? Jack might deal with a hint of jealousy despite knowing it was best to let Sally go.

Victor will also want to weigh in on Adam and Sally’s potential relationship. He knows Sally blew up Summer Newman’s (Hunter King) world and will likely warn Adam to steer clear of her.

Victor will definitely deliver a Sally warning of some sort, but Adam probably won’t pay much attention to it.

Finally, Victoria will decide she’s had enough of Billy’s antics. She’ll fly into a rage and have an angry meltdown that’s directed at her former flame.

Billy will face Victoria’s wrath, but he won’t care if his Ashland investigation turns up enough dirt to stop the marriage.

The Young and the Restless spoilers say the next two weeks will bring plenty of excitement, so stay tuned.

CDL will have other sizzling Young and the Restless spoilers, updates and news, so drop by often.