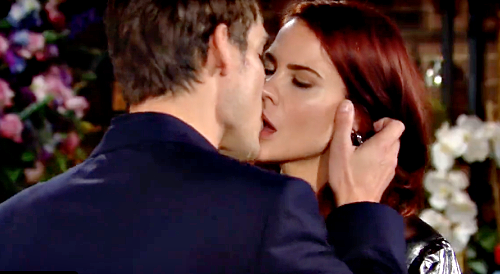 The Young and the Restless spoilers reveal the new weekly preview for September 6 to September 10 teases Sally Spectra (Courtney Hope) is summoned by Victor Newman (Eric Braeden). The patriarch interrogates and intimidates Sally about her intentions. Victor orders Adam Newman (Mark Grossman) to keep his distance, but he is unable to resist the feisty redhead as their romance sizzles.

Y&R spoilers reveal that Adam spontaneously asked Sally to be his date at the Newman Media launch party. The party attendees’ jaws dropped when Adam walked in with Sally on his arm. Both loved the attention, gasps and gossip that centered around their grand entrance.

After Sally was soaked from Phyllis Summers’ (Michelle Stafford) ice assault, she shared a passionate make-out session with Adam.

Even though Adam slammed on the brakes, he won’t be able to stay away from the naughty newcomer for long.

In the weekly preview for September 6-10, Victor summons Sally as there is something he wants to discuss. As Sally sits on the couch with an innocent look on her face, Victor starts the interrogation.

Sally hasn’t had a good start in Genoa City nor even come in with blank slate. Victor and Nikki Newman (Melody Thomas Scott) are not fans of Sally because of what happened with Summer Newman (Hunter King).

Plus, the fiery young woman already has quite the reputation in Genoa City, so she’s never going to get Newmans’ approval.

The Young and the Restless spoilers reveal that the patriarch demands to know Sally’s intentions for Adam. It doesn’t appear that she is given much of a chance to respond. Victor ends up trying to intimidate and scare Sally away from Adam.

Even though he has good intentions. Adam won’t be pleased as he never knew about Victor and Sally’s meeting.

The Young and the Restless Spoilers: Sally Spectra Passionately Rewarded

In one scene in the preview clip, Sally has resorted to guzzling booze, looks exhausted and isn’t speaking very clearly. Apparently, Sally went through some pain and suffering while being grilled by Victor.

At the end of the preview, Adam catches up to Sally and tells her that Victor made his point, now it’s time for him to make his. Just like that, Adam pulls Sally close to him and the two share a sizzling smooch.

This means Adam is defying Victor by getting “distracted” by Sally. We have a feeling that this is just the beginning of the drama.

Calling all #ALLY fans! 📞 You won’t want to miss all-new episodes of #YR on @CBS this week. 😍 Watch the latest episodes on @paramountplus. pic.twitter.com/4JC1WG5Ids