The Young and the Restless Spoilers Recap: Friday, January 22 – Summer Gets The Scoop On Sally – Chelsea’s Setback 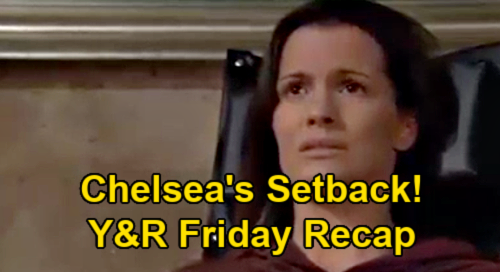 The Young and the Restless spoilers recap for Friday, January 22, tease that Adam Newman (Mark Grossman) will confer with Dr. Lena Cavett (Dana Sparks) at the penthouse about Chelsea Lawson’s (Melissa Claire Egan) lack of progress.

Chelsea will be in the living room as Adam tells Dr. Cavett that a friend brought by books last night, and then Chelsea made a sound.

Chelsea will silently fume, telling herself that Sharon Rosales (Sharon Case) is no friend. After Dr. Cavett leaves, Adam will encourage Chelsea, and Chelsea will say to herself that Adam’s saying all the right things but that he can’t let Sharon go.

Chelsea will wonder if Sharon is writing Adam notes in the margins of the books, and she’ll think that she doesn’t deserve this torture.

When Adam leaves to go run some errands, Chelsea will think that he’s going to see Sharon. Meanwhile, over at Sharon and Rey Rosales’ (Jordi Vilasuso) house, Rey will bring in flowers for Sharon…sent from Adam.

Rey won’t like it, and Sharon will disclose that she went to Adam’s place and took him some books. Sharon will say she won’t go back because Chelsea seemed upset by her visit.

In Los Angeles, Summer Newman (Hunter King) will meet with Flo Fulton (Katrina Bowden) at Il Giardino. Flo will say that warning Summer about Sally Spectra (Courtney Hope) is the least she can do.

Summer will explain that Sally wants Kyle Abbott (Michael Mealor) and her position at JCV. Flo will say that Sally will stop at nothing.

Flo will then tell Summer all about how Sally and Wyatt Spencer (Darin Brooks) were involved and then broke up, but that Sally wanted to hold onto Wyatt and said she was dying.

Flo will explain about how she encouraged Sally to move in with Wyatt, and when she figured out Sally’s scam, Sally kidnapped her and tied her to a radiator.

Summer will be shocked to hear that Sally then tried to seduce Wyatt to have his baby and later left Los Angeles in disgrace.

Summer will think that she and Flo should take a selfie for social media, and after Flo leaves, Kyle will come along and whisk Summer off to celebrate their successful trip to Los Angeles.

At Society, Lauren Baldwin (Tracey E. Bregman) and Jack Abbott (Peter Bergman) will be dining when Sally arrives to make her big Fenmore’s pitch to Lauren.

Lauren will step away for a call, and Sally will try out her pitch on Jack first, and he’ll love her ideas. Soon, Lauren will hear the pitch and she’ll love it, too.

Sally will be basking in her glory when she sees the selfie of Summer and Flo, and her face will fall. Jack will wonder what’s wrong, and Sally will cover.

Jack will think that Sally should take a victory lap, and he’ll call her a rising star.

Chloe will take off, Gloria will reveal herself to Kevin on the patio.

Gloria will be peeved with Kevin for destroying the flash drive, as she was trying to protect the Newmans and it was her boss that was going to blackmail the family. Gloria will reveal that her boss fired her, and that she needs a place to live, so she’s moving in with Kevin and Chloe.

Meanwhile, Sharon will send Rey off with coffee for Paul Williams (Doug Davidson), and then Adam will enter the coffeehouse.

Adam will meet with Dr. Cavett, who will disclose that she thinks that Chelsea is having a psychological setback – possibly depression – and needs to consult with a psychologist.

At the penthouse, Chloe will visit with Chelsea, who will still be upset about Sharon and Adam. Chelsea will start crying, and Chloe won’t know what to do. Chelsea will be highly frustrated that she can’t make Chloe understand what’s wrong.

Back at Society, Gloria and Kevin will arrive and see Jack with Sally. Gloria will awkwardly say hi to Jack. Sally will wonder who Gloria is, and Jack will say it’s a long story.

Sally will thank Jack for his help and support, and Jack will go while Sally looks at the selfie of Summer and Flo and worries.

Friday’s episode is going to be terrific, so stay tuned! We’ll be sure to give you updates as more Y&R news comes in. Remember. CDL is your premiere source for all the latest Young and the Restless spoilers, updates, and news.