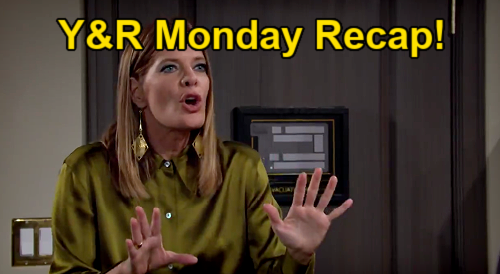 The Young and the Restless spoilers recap for Monday, January 11, tease that Billy Abbott (Jason Thompson), Lily Winters (Christel Khalil), Kyle Abbott (Michael Mealor), and Summer Newman (Hunter King) will be shaken after the Jabot jet makes an emergency landing in Colorado due to the snowstorm.

Kyle and Billy will bicker, and soon the pilot will announce that they’ll be stuck on the tarmac for a few hours or the rest of the night. Billy and Kyle will go outside in search of a hotel, and Summer and Lily will talk.

Summer will nearly let it slip that she and Billy slept together once, but she’ll cover, and Lily will be none the wiser.

Soon, Billy and Kyle will return to report that the nearest motel is 30 miles away, and they’ll all realize that they’re stuck on the plane until takeoff is possible. “Time to settle in for a long night,” Billy will say.

Naya will insist that she only has one daughter – Imani Benedict (Leigh-Ann Rose) – but Amanda won’t let Naya off the hook. Amanda will demand answers to her questions, and finally Naya will say that she’ll talk, but not here.

At Adam Newman’s (Mark Grossman) penthouse, Adam will be encouraging Chelsea Lawson (Melissa Claire Egan) on her recovery when Chloe Mitchell (Elizabeth Hendrickson) stops by. Adam will leave to run errands, and Chloe will share pictures and stories about Miles Fisher with Chelsea.

Chelsea will get emotional, and Chloe will apologize to Chelsea, saying that she’s going to get her life back. Chloe will say that she will never pressure Chelsea about how to live her life again, and that she wants to always be there for Chelsea as best friends.

Over at the Grand Phoenix, Kevin Fisher (Greg Rikaart) will come to see Phyllis Summers (Michelle Stafford). Phyllis will assume that Kevin has decided to fork over the flash drive with information damaging to Victoria Newman (Amelia Heinle) on it, but Kevin will say that he destroyed the flash drive.

Phyllis will be dismayed, and Kevin will urge Phyllis to be the best version of herself that she can be. Kevin will think that Phyllis has already won the war – she got her hotel – so she should be happy. Phyllis will say that she’s got a lot to think about.

Later, Amanda will be in the lobby of the hotel when Naya walks in. Amanda will thank Naya for coming, and a stoic Naya will say that she’d rather talk up in Amanda’s suite for privacy. “Let’s get this over with,” Naya will say.

At Society, Nick will arrive as Nikki Newman (Melody Thomas Scott) and Victoria are arguing about how Victor Newman (Eric Braeden) is providing a specialist for Chelsea’s recovery. Victoria will think that Adam’s going to use the situation to wrap Victor around his finger again.

Nick and Victoria will snip at each other, and after Victoria leaves, Nick will share with his mother that he and Victoria are on the outs over Phyllis. Nick will gripe that Victoria is just like Victor, and Nikki won’t like that. Nick will say that he’s refusing to put up with this behavior from Victoria.

At Crimson Lights, Mariah Copeland (Camryn Grimes) and Faith Newman (Alyvia Alyn Lind) will be talking when Faith gets a text from someone calling her a “loser” for not being at a party tonight.

Adam will walk in, and Faith will start blasting him for still being in Genoa City. Adam will try to get a word in edgewise, but Faith will walk off and text Jordan (Madison Thompson) saying that she needs a friend.

Back at the Grand Phoenix, Nick will return to find Kevin and Phyllis together. Kevin will skedaddle, and Nick will share that he told Nikki that he doesn’t appreciate how Victoria is treating her. “I’m standing by your side,” Nick will say. Phyllis will feel lucky to have Nick.

Finally, back at Adam’s penthouse, Adam will return to learn that Chelsea is asleep in the other room. Adam will sit on the couch, and he’ll get a text from Victor saying that Victor’s thinking about him and Chelsea, and that Adam shouldn’t hesitate to reach out. Adam won’t reply.

It sounds like a lot of Y&R drama is heating up for Monday’s episode, so stay tuned! Stick with the CBS soap and don’t forget to rely on CDL for the latest Young and the Restless spoilers, updates, and news.

Next week on #YR, Phyllis prepares to blackmail Victoria, Abby thinks she may be pregnant, Faith confronts Adam, and Amanda is overcome with emotion. pic.twitter.com/QoN8gwVETR