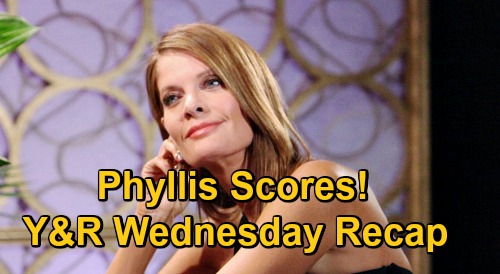 The Young and the Restless spoilers recap for Wednesday, January 6, tease that Kevin Fisher (Greg Rikaart) will be enjoying coffee at Crimson Lights when Victoria Newman (Amelia Heinle) arrives.

Kevin will fish for information about scandals at Newman Enterprises, but Victoria won’t cop to any scandals, saying that she always strives to be an ethical CEO. When Victoria leaves, Kevin will say to himself, “You have no idea how much I’ve done to help you.”

As they talk in Phyllis’ suite at the Grand Phoenix, Phyllis will insist that Nick doesn’t need to go “save” Chelsea, and that Chelsea has Adam Newman (Mark Grossman). Nick will take it under consideration.

Down in the lobby, Amanda Sinclair (Mishael Morgan) will fill in Devon Hamilton (Bryton James) about how Naya Benedict (Ptosha Storey) is coming to the hotel to meet her today. Devon will offer his support, and as he and Amanda are talking, Elena Dawson (Brytni Sarpy) will see them and get pensive.

Victoria will walk into the lobby as well, and she’ll have words with Phyllis. Victoria will needle Phyllis over Nick buying the hotel for her, and Phyllis will insist that it was a loan and that she’ll pay it back soon.

Victoria will scoff, and Phyllis will take a jab at Victoria, pointing out that Victoria is all alone and has no one to hold her at night.

At the hospital, Adam will comfort Chelsea, who will only be able to blink to communicate. Adam will hope that Chelsea can forgive him for causing this situation, and Chelsea will move her left hand, which Adam will take in his.

Adam will talk with Nate Hastings (Sean Dominic) out in the hallway, telling Nate that he’s arranged with the chief of staff to take Chelsea home today. Nate won’t like that, but Adam will insist that it’s happening.

Back at Crimson Lights, Phyllis will find Kevin and she’ll quickly get to the bottom of what Gloria Abbott (Judith Chapman) had going on with Newman Enterprises.

Kevin will explain reluctantly that Gloria got dirt on the CFO of a Newman subsidiary in Los Angeles who was embezzling money, and that she had planned to blackmail him.

Phyllis will get excited as she realizes that Victoria knew all about the embezzlement and swept it under the rug because she didn’t want Victor Newman (Eric Braeden) to know about it and fire her.

“We are going to exploit this secret!” Phyllis will gush, and she’ll be giddy as she finds out that Kevin has video proof of the CFO embezzling. Phyllis will take off, telling Kevin to hold onto the evidence.

Adam and Nick will bicker over Chelsea, and Adam will refuse to let Nick come see Chelsea at the penthouse, where Chelsea’s being moved.

Back at the Grand Phoenix, Elena will lead Nate into a suite that she reserved for them. Nate will be happy, but he’ll want to make sure that Elena doesn’t feel pressured.

Elena will assure Nate that she wants this, and she’ll say that even though she did feel guilty about how they first got together, she wants them to live their life. Nate will happily put the “do not disturb” sign on the door.

In Phyllis’ suite, Phyllis will return to find Nick in bed and waiting for her. Nick will reveal that he didn’t go to see Chelsea, as Chelsea is home with Adam now.

And downstairs at the lobby bar, Amanda will wait with a glass of wine as she anticipates Naya’s arrival. Naya will text saying, “I don’t think I can do this. I’m not ready.” Amanda will be discouraged.

Finally, at Adam’s penthouse, he’ll have Chelsea waiting in a wheelchair in the living room as a private nurse readies the den, which has been turned into Chelsea’s new room.

Adam will talk with Chelsea, telling her that he entered a truce with Victor, and that he’s serious about helping Chelsea to heal. Adam will vow to bring Chelsea back to him.

It sounds like a Wednesday’s episode of Y&R is going to be terrific, so stay tuned! Stick with the CBS soap and don’t forget to keep CDL at the ready for the latest Young and the Restless spoilers, updates, and news.