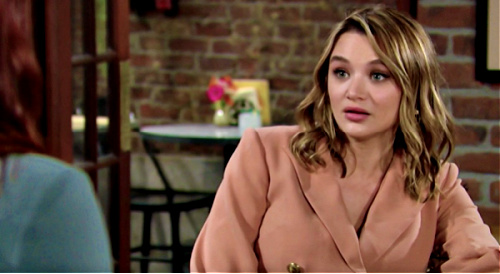 The Young and the Restless spoilers document that Sally Spectra (Courtney Hope) has once again chosen to involve herself in Summer Newman’s (Hunter King) life. This crossover character from The Bold and the Beautiful is an outsider in Genoa City, Wisconsin.

However, Summer’s mother, Phyllis Summers (Michelle Stafford), was once an outsider herself.

Red instantly identified Sally as today’s version of her younger self. But Summer remains greatly influenced by her mother, which adds another spicy ingredient to this daytime mix.

Young And The Restless Spoilers – Standing With Sally Spectra

Sally’s grandmother, Shirley Spectra (Patrika Darbo), has crossed over from B&B as well. However, she’s only been seen via video chat sessions to-date.

Sally’s me-first, reckless behavior forced Wyatt Spencer (Darin Brooks) to tell her to stay away from him and Flo Logan (Katrina Bowden) or to leave LA. She chose the later option.

So, those who side with Shirley’s personality type are standing with Sally against Summer. Jealousy drives a falsely labeled pursuit of so-called justice in this vindictive game.

Young And The Restless Spoilers – How Has Summer Newman Wronged Rival?

How has Summer wronged Sally, other than living the life that Hope’s character wants? The answer is that she hasn’t.

Summer was a sweet child who came to be tagged as snowflake by Mariah Copeland (Camryn Grimes). Y&R devolved King’s character a few years ago. King returned from a voluntarily break from the cast while she was working on the nighttime sitcom Life in Pieces.

But, Summer has greatly matured within the last year-plus. She’s earned respect in the business world and is fully supportive of Kyle Abbott’s (Michael Mealor) fatherhood status. Summer also made the selfless decision to postpone Skyle’s wedding so that her fiance could focus on his son, Harrison Locke (Kellen Enriquez).

Sally is clever, aggressive, and determined. Summer is smart, assertive, and goal-oriented.

The contrasting sentences used three subjective labels to describe Sally and another three to describe Summer. One could look at each person and claim either sentence is slanted negatively or positively, based on perception.

The Team Sally or Team Summer question intends to further the reality that people see what they want to see in GC. Opinions create conflict, as has long been true in this famous Midwestern town.

Phyllis was an outsider, just like Sally is now. Summer hasn’t had an easy life, despite her well-heeled background. But there’s no doubt that both ladies clash, which is why Y&R’s new rivalry is fully engaging.