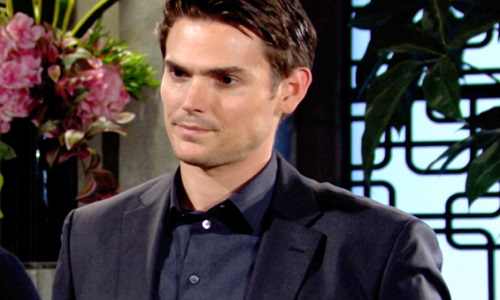 In Phyllis Summers’ (Michelle Stafford) suite on Tuesday’s Y&R episode, she’ll shut down Nick Newman’s (Joshua Morrow) attempt to talk. Phyllis won’t want to say something she might regret, so she’ll push for space instead.

Meanwhile, Victoria Newman (Amelia Heinle) will talk to Nikki Newman (Melody Thomas Scott) about the private island getaway she has planned as a honeymoon surprise.

Nikki will think married life looks good on Victoria, but she’ll remain concerned about all the sibling drama between Victoria and Nick.

At Newman Media, Ashland will arrive and learn he’s being included in a plot against ChancComm. Adam and Victor Newman (Eric Braeden) will think Ashland could be useful, but he’ll warn that they shouldn’t tell him any details they don’t want repeated to Victoria.

Ashland will insist he doesn’t want to keep any more secrets from his wife, but Victor and Adam will discuss their trap anyway. Once Ashland gets updates offscreen, he’ll be impressed by the clever, ruthless move.

Ashland will marvel over Jesse Gaines (Jamison Jones) becoming useful and will think ChancComm will definitely be weakened if this scheme is successful.

“And we’ll be sure to rip it out from under his nose,” Victor will declare. He’ll have total confidence in this scheme and their ability to exploit Billy’s Achilles’ heel.

In the park, Sharon Rosales (Sharon Case) will wonder what angle Billy’s working when it comes to Gaines. After Billy suggests bribery is the least of it, Sharon will ask if he’s really going to throw kidnapping and murder accusations around.

Billy will suggest it’s interesting that Sharon would go there. He’ll think it’s because Sharon knows what Adam is capable of, but she’ll contend that it’s impossible. Sharon won’t think Victor would order something like that and won’t think Adam had any real motive to pitch in.

As far as Sharon’s concerned, all of this will be about spreading Adam negativity. Sharon will maintain that Adam deserves a chance to turn his life around and will think Billy’s forgotten that he got one, too.

At the cottage, Noah Newman (Rory Gibson) will catch up with Rey Rosales (Jordi Vilasuso). Despite how glad he is to be back, Noah will admit Sharon’s place doesn’t really feel like home anymore.

Noah will add that London didn’t feel like home either, so he’ll feel a bit stuck in limbo as he tries to figure out his future.

At Crimson Lights, Sally will spot Jack Abbott (Peter Bergman) and quiz him about his flight back with Phyllis. After Sally mentions that their relationship really seems to be deepening, Jack will get annoyed.

Jack will remind Sally that she has her own rather tricky relationship with her boss and will excuse himself to catch up on some reading nearby.

Afterward, Adam will walk through while Sally’s sitting on the patio. He won’t be impressed when she calls his attention to more positive press.

Sally will want to capitalize on the dramatic story of how the wedding dress came to be, but Adam will shrug that he’ll go along with whatever Chloe Mitchell (Elizabeth Hendrickson) says.

Sally will be offended since she thought the fashion division meant more to Adam, but he’ll tell her to stop taking everything so personally.

Adam will add that there’s more to Newman Media than Sally’s fashion line and leave the coffeehouse to take a work call.

In the main dining area, Phyllis will complain to Jack about how she can’t go too deep with Nick. She’ll explain that they seem to crumble if any conflict arises. Phyllis won’t understand their issues since nothing big is happening like cheating or secrets.

However, Jack will contend that all couples go through rocky patches. He’ll hear about Phyllis taking a step back before she talks to Nick and won’t think that’s a bad idea considering her temper.

Jack will encourage Phyllis to have an adult conversation with Nick once she’s calmed down – and he won’t want her to give up.

Back on the patio, Sally will mull over calling Adam before deciding against it. When Sally spots Phyllis and Jack at a table together, she’ll scoff at them.

Meanwhile, Adam will talk to someone over the phone and agree that Sally is a real asset to Newman Media. He’ll contemplate calling Sally before putting his phone away.

When Billy finds Sally on Crimson Lights’ patio, he’ll talk about the story he’s working on about Newman Media’s entanglement in Gaines’ disappearance. Billy will be particularly curious about Sally’s return flight from Tuscany, but she’ll make it clear she has nothing to say to him.

After Billy warns Sally to protect herself from Adam, she’ll note that she’s been warned about Billy as well. Sally will declare that she can hold her own and make her own decisions “thank you very much.”

Nearby, Adam will spy them talking and seem concerned about what’s going on behind his back.

At the Newman ranch, Noah will pay Nikki a visit. Nikki will think there’s more to Noah’s decision to leave London, but he’ll argue that he’s not hiding or running away.

Noah will act like he mainly wants to be in town due to family issues, so Nikki will admit all this Victor and Nick tension won’t be resolved easily.

In Victoria’s office, Ashland will come clean about the move Victor and Adam are planning against Billy. Victoria will urge Ashland not to divulge the details. If Billy wants to play in the big leagues, Victoria will think he needs to be able to protect himself.

Once Victoria and Ashland head to Society, they’ll bump into Victor. Victoria will assure her dad that she’s on board with whatever their plan is. She still won’t want to know the details, but she’ll insist she’s done protecting Billy.

Afterward, Victor will run into Nick and hope from the bottom of his heart that his son can forgive what happened in Tuscany. Nick will argue that he’s over the way he’s used and then cast aside in favor of Adam when he doesn’t play by Victor’s rules.

Victor won’t understand why Nick doesn’t feel like a part of the family anymore, but his lack of awareness will be the problem in Nick’s eyes. Nick will argue that he’s just exhausted at this point and will cut the conversation short.

In her suite again, Phyllis will order up a bunch of romantic dishes from room service and get out some lingerie. She’ll text Nick in hopes that they can talk, but he’ll reply that he’s staying at the house tonight since Christian Newman (Alex Wilson) has a cold.

At Society, Ashland will be sitting with Victoria when he gets a call from his oncologist. He’ll find out he’s not reacting to his treatment as well as they’d hoped. Victoria will wonder what this means, so Ashland will confirm that his chemotherapy isn’t working.

Victoria will then suggest a more aggressive drug or even something more experimental. She’ll take Ashland’s hands and insist they’ll just have to fight a lot harder, but he’ll stare back in silence like he’s less hopeful.

The Young and the Restless spoilers say Ashland will turn to Nate Hastings (Sean Dominic) for a second opinion later this week, so stay tuned.

CDL’s where you want to be for sizzling Young and the Restless spoilers, news and updates, so pop back in soon.