The Young and the Restless Spoilers: Victoria Needs A Life – Will She Get A New Man & Quit Pestering Billy? 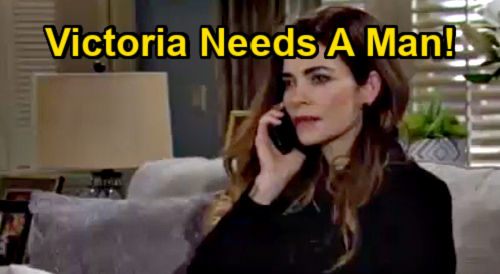 The Young and the Restless spoilers tease that Victoria Newman (Amelia Heinle) is really on a mission these days. As Y&R viewers know, Victoria has apparently gotten the jealousy bug over Billy Abbott’s (Jason Thompson) new relationship with Lily Winters (Christel Khalil).

Even though Victoria doesn’t seem to want Billy back at this point, she’s unsettled by Billy’s happiness with Lily.

It seems like Victoria is more comfortable with things when Billy is being a big screw up and groveling for her forgiveness and understanding.

And now that Billy is in a much more mature and even-keel relationship with Lily, Victoria seems to want to throw a wrench into the mix to shake things up for her ex. It’s really not very nice of Victoria at all.

And, as Y&R viewers know, Victoria has been using the kids as a weapon to ruin some of Billy’s plans with Lily.

Billy seems to be onto Victoria, and Lily is definitely onto Victoria, so it’s probably only a matter of time before Billy and Lily enact a strategy to deal with Victoria’s immature behavior, and it will be interesting to see what they come up with.

Really, Victoria needs a life at this point – meaning a social life beyond taking care of her kids and beyond meeting business associates at the Grand Phoenix.

Right now, Victoria’s entire life seems to be working like a dog at Newman Enterprises, taking care of the kids, and bickering with Phyllis Summers (Michelle Stafford).

Victoria needs a real relationship soon – before she goes too far in meddling with Billy and Lily. But who would Victoria even be with at this point?

There’s basically no one on canvas who’s free for her, except perhaps Nate Hastings (Sean Dominic) – Y&R viewers will remember that Nate and Victoria were fairly good friends at one point, right after Nate first moved back to Genoa City.

And considering that Nate is about to get cheated on by Elena Dawson (Brytni Sarpy), perhaps he’ll be free down the line. But really, Victoria probably needs some new blood.

If Victoria really wants to get under Billy’s skin, it would seem that the way to go would be to find some new hot, successful man and pretty quickly introduce him to the kids.

We’ll see what happens here, but it does seem like Victoria needs a new man, so she can stop interfering in Billy and Lily’s relationship and have a life of her own.

Do you think we’ll see Victoria in a new romance soon? Keep stopping by CDL so you don’t miss any of the latest Young and the Restless spoilers and news. We’ve got you covered!