The Young and the Restless Spoilers: Chelsea Hides Recovery From Adam & Sharon – Catches Cheaters With Help of Nurse? 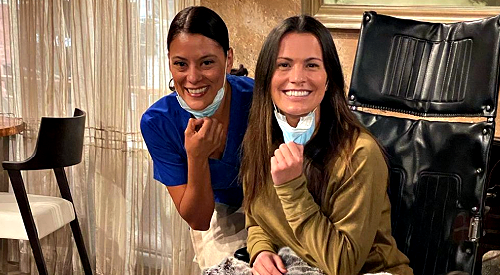 The Young and the Restless spoilers tease that Chelsea Lawson (Melissa Claire Egan) may have a devious plan in store. As Y&R viewers know, Adam Newman (Mark Grossman) has been dismayed by Chelsea’s lack of progress in her recovery from her stroke, but he did notice that Chelsea made an angry utterance after Sharon Rosales’ (Sharon Case) last visit.

Well, during the week of January 25-29, Adam will decide to something a bit calculated and unorthodox. He’ll decide to ask Sharon to become the mental health professional on Chelsea’s care team, knowing that it will probably infuriate Chelsea beyond belief.

And that will be the point – to light a fire under Chelsea to snap her out of her depression and give her a reason to fight to get better.

The only thing is that Chelsea’s a real pro when it comes to running a con. Y&R viewers have been privy to some of Chelsea’s internal dialogue, and she was absolutely furious when Sharon showed up at the penthouse.

But when Adam suggests in an upcoming episode that Sharon be Chelsea’s therapist, Chelsea will surprisingly agree…because she wants to keep an eye on Sharon and Adam.

Chelsea will also move her hands a bit, although this will go undetected by everyone. And that leads us to wonder if perhaps Chelsea’s newfound anger over Sharon will spur her to make some big progress in her recovery – progress that she’ll hide from Adam and Sharon.

In fact, Chelsea might be able to speak and communicate much sooner than she lets on to Adam and Sharon!

Might Chelsea even enlist the help of her private nurse to keep her progress a secret from Adam and Sharon?

Y&R viewers may know by now that Chelsea’s nurse is being played by Melissa Claire Egan’s good friend Evelina T. Martinez, and one wonders if Chelsea might regain the ability to speak and ask her nurse to hide her progress from Adam and Sharon so that she can catch them in the act of cheating.

Whatever happens, it looks like Chelsea may end up duping Adam and Sharon big time, all because she doesn’t trust them.

And it could culminate in a big moment in which Chelsea reveals her progress to a stunned Adam. That would be a shocking moment for sure!

Do you think that Chelsea will enlist the help of her nurse to keep her recovery and progress a secret from Adam and Sharon? Keep on watching Young and the Restless, and be sure to stick with CDL for all your current Y&R spoilers, updates, and news.