BY Heather Hughes on March 20, 2020 | Comments: one comment
Related : Soap Opera, Spoiler, Television, The Young and the Restless 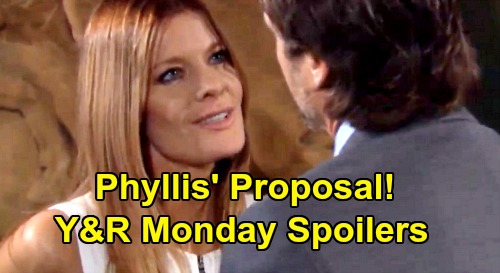 The Young and the Restless (Y&R) spoilers for Monday, March 23, tease that Phyllis Summers (Michelle Stafford (Michelle Stafford) will visit Nick Newman (Joshua Morrow) with a few goals in mind. Y&R fans know Summer Newman (Hunter King) figured out that her parents were hooking up again. It looks like Summer will call her mom out on that and leave Phyllis wondering how to handle it.

Phyllis could just tell Summer to worry about her own risky reunion! It’s hypocritical of Summer to judge Nick and Phyllis when she just reconnected with Kyle Abbott (Michael Mealor).

Nevertheless, Summer will fret about her mom and dad heading down a painful path again. This will just be about protecting Phyllis and Nick’s hearts, so at least Summer’s intentions will be pure.

In light of Summer’s new awareness, Phyllis will talk to Nick about how they should handle their daughter. Nick will argue that there’s nothing to handle since they don’t intend to get back together.

However, Nick will actually be bummed when Phyllis shifts the conversation to business. Despite the act he puts on, Nick is quite drawn to Phyllis and clearly struggles to resist their chemistry.

The Young and the Restless spoilers say Phyllis will have a deal to present. Nick will hear a proposal that could benefit both Newman Enterprises and the Grand Phoenix. It seems Nick will be open to the idea, but Phyllis will pick up on his disappointment over the topic change. As Phyllis exits, she’ll feel satisfied knowing she ruffled Nick’s feathers a bit.

Meanwhile, Mariah Copeland (Camryn Grimes) will determine that she’s lost the battle for Tessa Porter’s (Cait Fairbanks) heart. Despite a third and final attempt to win Tessa over, Mariah will return home single.

At this point, Mariah will just try to move toward acceptance. Since Mariah will think there’s no hope, she’ll begin preparing for future that doesn’t include Tessa.

Mariah may call up that entrepreneur Devon Hamilton (Bryton James) put her in touch with. Since Mariah was offered a job in Chicago, there’s surely a reason for that.

We know Mariah isn’t leaving town to start a new life, but Y&R seems to be setting up a fake-out where it’ll look like she is. As part of Mariah’s preparations for this future without Tessa, she may take that Chicago position.

Of course, both Cait Fairbanks and Camryn Grimes have plenty of episodes in the can that haven’t aired yet. Tessa and Mariah have many more scenes coming up in Genoa City, so there’s more hope than Mariah assumes. Mariah’s romantic luck will eventually turn around, which means any Chicago plans won’t last long.

Finally, The Young and the Restless spoilers say Jack Abbott (Peter Bergman) is building toward a major blowup. At some point in the next couple episodes, Jack’s going to hit the roof!

There’s a good chance that’ll involve Kyle and Theo Vanderway’s (Tyler Johnson) persistent feud, which they may never be able to resolve. The conflict will get worse in the weeks ahead, so we’ll give you updates on these dueling cousins.

Don’t forget to stop by frequently for more Y&R news. We’ll pass along all the details as Kyle and Theo’s war revs up. Stick with CDL for exciting Young and the Restless spoilers, news and updates!