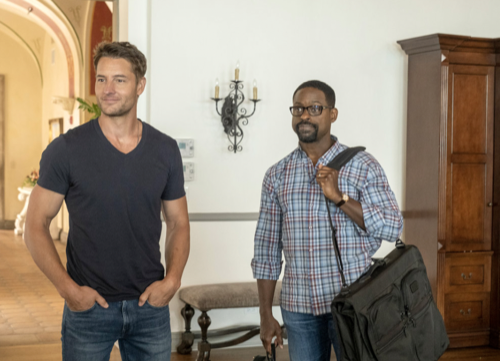 Tonight on NBC their honest & provocative dramedy series This Is Us with an all-new Tuesday, May 18, 2021, Finale episode and we have you This Is Us recap below.  On tonight’s This Is Us season 5 episode 16 called, “The Adirondacks,” as per the NBC synopsis, “The family gathers for Kevin and Madison’s wedding.”

In tonight’s This is Us Final episode, the episode begins with Kevin, he is looking in the mirror and practicing his vows.

Then, we see a younger Rebecca, she sits down with some wine and popcorn to watch a Dynasty wedding from back in the ’80s and Jack taped over it with baseball. Rebecca loses it with Jack, she had to wait one week to watch this episode and he taped over it. Jack knows he is in trouble.

Then we see a young Madison, her mother left her when she was a child saying that she could no longer live with her father, she leaves Madison earrings and tells her to wear them on her wedding day. Fast forward, Kevin is talking about the wedding and Madison clued out for a minute. Nicky comes in with his computer, he is documenting everything. Madison tells Kevin this is his last chance to make a run for it.

Then she tells him no movie quotes, improv Kevin is not invited to the ceremony. Kevin says he will let him know. Nicky asks if they can get a U-Haul at the wedding because his gift is being delivered there and they will never be able to carry it home. Kevin tells Nicky to interact with him as little as possible today.

Kate and Toby are getting ready, she has the kids down for a nap. He tells Kate that he got a job offer. Although, he tells her that he is going to have to be in San Francisco three days a week when the office re-opens. Kate looks upset. He tells her that they should really considerate, they are not going to survive much longer on her teaching assistant salary alone and he hasn’t gotten a serious offer in a long time. He says he has to go back to work, he loves their children but. She says she’s got it, she needs a second to digest it, but she is not thrilled.

Jack is in bed with Rebecca, she waked up to see all three kids near her bed. Jack wakes up and asks what’s wrong. Kate asks if they still love each other.

At Randall and Beth’s home, the kids are there with Rebecca and Miguel. Beth tells them that Malik applied to the four top schools in the Philly area and he got into three because he is a beast. She looks over at Alex and says she is a great student as well. Randall tells everyone to get their things together.

Rebecca tells Randall that she feels they didn’t have time to catch up and she wanted to hear more about his trip to New Orleans. He says he told her about it, she says not that much and they haven’t seen each other in ages.

Nicky and Kevin go to the venue, Nicky asks him how rich he is, Kevin says he didn’t have a choice but to rent the whole place because of COVID. Randall walks in and asks Kevin how he is, he says good. Randall looks at him questioningly and says last week you were Jerry McGuire. Kevin says today he is good and exactly where he wants to be.

Kevin is told that there is a problem, the altar crashed and the cross beam broke, but they have a plan. They are going to rearrange everything and have them married under a tree. He says Madison designed the whole thing and he wants the altar. He wants everything the way Madison wanted.

Rebecca catches Randall alone, she nabs him for coffee and that chat about his trip. They sit down, he shows her photos.

Rebecca and Jake are sitting with the kids, they watch their wedding video. The kids tell them that they need to get married again, today.

Madison is thinking back to her childhood, not happy thoughts when Kate interrupts her.

Rebecca gets married again in front of the children. They both dress up, as well as the kids. In fact, they all marry each other, adorable.

Kate resigns from her job, Toby got a job offer and they both can’t work full-time. Her boss, Phillip, doesn’t want to let her go, he really likes her and he does not accept her recognition, he hangs up and tells her resignation rejected.

Kevin is panicked, Randall tries to keep him calm. Beth comes in and says she is going to make a few changes to Tess’s dress. Miguel and Nicky are working on the altar, they are arguing. Toby is fixing the flowers and asks Kevin about a long-distance relationship, Kevin says he got divorced and almost missed the birth of his children, it sucked for him. Nicky’s present arrives, Adirondack chairs with the initials engraved in them. Kevin needs air, he walks out.

Toby tells Kate that he is not taking the job, he cannot be away for three days per week. She tells him he can’t turn it down and she is not going to quit her job either, it is the job she has been waiting for her entire life. She says she was thinking about their vows, it’s four years and two kids ago. She says they can do this. Beth changes up Tess’s dress, she loves it. The two makeup, Tess tells her that she loves her and is sorry if she forgets for the next ten years. Malik was accepted at five places, even Harvard. Deja is in shock, and it’s in Boston.

Rebecca apologizes to Randall, she tells him that she knew things and she kept them a secret and she never talked to him, she never let him talk. They sit down together, he talks about his mother.

Madison goes to see Kevin and asks him if he is in love with her. He tells her they are going to become a family. She says she has fallen in love with him, he is easy to fall in love with. She says she knows the timing is terrible. Her mother gave her earrings when she left, she left her with a father who gave her nothing. She has stumbled through a life accepting scaps and he is so wonderful, his family has given her the first family that she has had ever had. And she might tiptoe around the fact that he may be not in love with her.

He tells her to take a breath, he says he loves what they have, he loves what they are building, he thinks she is incredible and I love watching her with their children. The time he spends with her he feels good and full and happy. He says he knows they didn’t come together under normal circumstances, she knows that. But, he says what they have will grow, it will. She says she can’t marry someone who is not in love with her, she is worthy of that. He asks her to please don’t do this.

Kevin is outside sitting in the Adirondack chair, Rebecca as well. He tells her he couldn’t say it to her, he couldn’t lie to her. Kevin says he is numb. They talk about Jack and say he wouldn’t leave Kevin’s side tonight. Rebecca says she wants to spend as much time with them as possible. She asks Kevin to build her that house, the house that Jack was going to build for her, she doesn’t have that many good years left. Kevin says ok. Randall says it is always darkest before dawn.

We look forward and it is the wedding day again, but Kates and Randall want to deliver a perfect wedding speech.