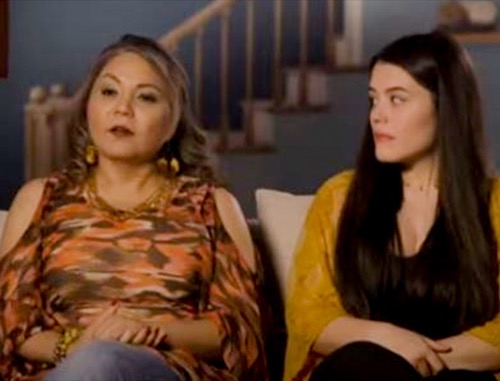 Tonight on TLC their reality show looking at teenage pregnancy and parenthood UNEXPECTED premieres with an all-new Sunday, January 17, 2021 episode and we have your Unexpected recap below.  On tonight’s Unexpected season 4 episode 5 called, “Fighting With Your Mom on Social Media,” as per the TLC synopsis, “Myrka and Liliana have a blowout fight over social media. Jenna gives her parents an ultimatum – get along at the baby shower.

Reanna and Taron sit down with their mums to sort out custody. Tyra gets stuck in a storm on the way to see Alex and Layla.”

So make sure to tune in tonight between 10 PM – 11 PM ET for our Unexpected recap.  While you wait for our recap make sure to check out all our television spoilers, news, recaps, and more, here!

Jenna’s relationship with her mother is quite good. Jenna doesn’t live with her mother. She lived with her dad. Jenna moved in with him after ninth grade because she was having problems at the time with her mother and so the relationship improved after she moved out. The two of them are a lot alike. In a funny turn, it’s now her father she’s having problems with. Jenna’s father and mother wants to have two baby showers. Jenna is resisting the idea of having two baby showers because she just wants one with both sides of her family and she wanted to invite Aden’s family to just one baby shower. She also wants everyone to get along for the sake of her baby. She thinks if she gives in now on the baby shower thing then they’re going to want to separate birthdays for the baby as well.

Myrka’s mother was also a problem. Her mother Lilliana kicked her out of the house when she found out her daughter was pregnant and she really didn’t know what was going to happen to Myrka. Myrka’s boyfriend Ethan turned out to be a good guy. He took responsibility and his family were kind enough to take in Myrka, but Lilliana didn’t know that was going to happen. She only found out about it later. Lilliana now has a better relationship with her daughter because she said Myrka isn’t her responsibility anymore. She’s now Charlie and Michelle’s problem. Charlie and Michelle are Ethan’s parents. They’re good people as well. They knew what it was like to have an unexpected pregnancy and so they supported their son and Myrka through this trying time.

Ethan’s parents also did little things to bond. They are a close family and they welcomed Myrka into their family. They also tried to welcome Lilliana. Only Lilliana confuses them. She wavers between being nice and being mean. She kicked her daughter back when she was being mean and she showed up at the gender reveal when she suddenly decided to be nice again. The rest of the family didn’t know that Lilliana hadn’t liked the gender reveal. She thought it was too extravagant for a child she still considers to be a mistake and so luckily she didn’t say that to Ethan or his family. She tends to save those comments for her daughter. Lilliana constantly reminds her daughter that she is not helping with the baby or happy about the baby or wants to be a significant in the baby’s life.

Lilliana saved up all of her nastiness for Myrka because she considers Myrka getting pregnant as a betrayal. It therefore wasn’t surprising when the two got into a fight on social media and that caused even more fractures within their relationship. Lilliana sometimes forgets she’s the adult. She doesn’t treat her child like a child sometimes and so its good that Myrka is around Ethan’s mother because at least then she gets the love and support she needs right now. Reanna’s didn’t have to worry about her own mother. Her mother loves and support her, too. She also speaks up in the best interest for her future grandchild and she wasn’t afraid to butt heads with Reanna over it. Jessica tells Reanna that her baby needs both parents.

Reanna doesn’t like that because she’s still mad at her ex-boyfriend Taron. Taron and Reanna were getting back together when he slept with someone else and that ended any chance of a reunion. Reanna is still holding that moment over Taron’s head. She pushes him away and she tries to refuse every request from him on custody. Taron wants to share custody. He told Reanna that’s what he wants because he wants to be a part of his child’s life and she turns him down because she wants to hurt him. Reanna is fifteen. She was being childish because she is a child and her mother wasn’t afraid to call her out on it. Jessica reminded Reanna that she was about to become a mother and that she has to put her own daughter first. And what was best for the baby was to have two parents.

This is why Jessica speaks up for Taron. She tells him not to give in on everything because his feelings matter too and so she tells to offer some pushback. She tells him that Reanna shouldn’t get her way all the time. The same must be said for Matt, Jenna’s father. Jenna tried to tell her father that she wanted the one baby shower and he blew up. He refused to share space with Heather. He tried to say that Heather caused all the scenes and so Jenna told him that he was partly responsible as well, but Matt didn’t want to hear it. He refuses to be around Jenna’s mother because he thinks she’s this terrible person and that she would do or say something to set him off. And so he told Jenna that she was going to get two baby showers whether she liked it or not.

Then there’s Tyra. Tyra’s daughter Layla is back to living with Alex because Alex’s mother’s boyfriend moved out and so now its safe for the little girl to live over there with her father. Alex loves his daughter. He and his family were the ones mostly raising her because Tyra was at school a lot. She was getting her college education and she was also a cheerleader. The cheerleading thing was mostly for her. It gives her a chance to hang out with friends and just be a kid every once in a while. And that’s a problem for Alex because he thinks the worst when Tyra doesn’t come home at night. He thinks she’s with another guy and he wants it to bring it up, but he doesn’t because he doesn’t like confrontation.