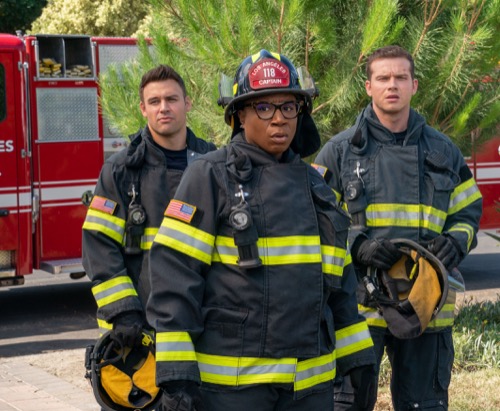 Tonight on FOX their #1 drama 9-1-1 airs with an all-new Monday, September 26, 2022, season 6 episode 2, “Crash & Learn” and we have your 9-1-1 recap below. In tonight’s 9-1-1 season 6 episode 2 as per the FOX synopsis, “The 118 race to the rescue when a structure collapse at a “happiness convention” traps people under the rubble. While on FaceTime with her mom, Athena’s father suffers a stroke and crashes through the wall of his house.

Hen stretches herself too thin with test prep and her new responsibilities at the 118, while Maddie tries to help a new recruit get his bearings at the call center.”

In tonight’s 9-1-1 episode, Athena and Bobby drove out to her parents’ place after the accident. Her father suffered a neurological event that caused him to crash his car into his house. He almost killed his wife and destroyed the house, but he was alive. He was alive and in a coma. The doctors aren’t sure they can do anything else for him. It was now about making him comfortable for whatever came next. Athena and Bobby were supposed to go on vacation. They canceled that once this thing with her father cropped up. They also still took the time off just so that they could be with her mother during this trying time.

They both had people already covering their positions while they were out. This recent accident hadn’t changed things in that sense and so the 118 still had calls to respond to. Hen acted as captain. Her first call as the captain had been to the site of adultery. It turns out two married neighbors were sneaking around thanks to an underground tunnel. Only the married woman’s husband thought it was a gopher. He planted traps. When that didn’t work, he planted bombs. He set off a couple of them when he realized that it wasn’t a gopher. It was a man sleeping with his wife. And so the 118 came along.

They rescued the guy underground. They also arrested the husband because he suspected his wife was cheating and he threw the second bomb to kill him once he knew for sure. It turns out LAFD were deputized to act as peace offers during moments of crisis. The attempted murder allowed them to arrest someone. They then called the police and the police finished what they couldn’t. Hen did great on her first day as captain. She didn’t mind arresting people. She did mind the extra workload. Hen was going to med school to become a doctor on top of her regular duties as an EMT and now she was temporarily the captain as well.

The extra duties began getting to Hen. It was only one day on the job and it was getting to her. Hen was struggling under the weight of it all. She also hadn’t wanted to ask for help. Chimney had tried to talk to her about how she was doing. She fobbed him off. She hadn’t wanted to talk. She was too busy doing the extra paperwork for the arrest and studying for her finals. She was running ragged after a day’s work of double duty. Then her finals came. Hen struggled with finishing the test. She’s never struggled before. But she was literally the last person done with the test because she was just so tired. She even drove him afterward at night tired.

Hen’s car sped into the wrong side of traffic. She almost hit another car and it was a miracle that no one was hurt. Hen survived her near miss in traffic. She wasn’t going to survive double duty any much longer and so her wife thought it was a mistake for her to take on being temporarily captain. Hen had sort of talked herself in the job. Bobby had been looking for someone when she suggested herself and said she could handle all of her duties. Bobby chose to trust in her word when what he should have done was trust in himself. He initially wrote off Hen because he thought she had too much going on. And that was the truth.

Because even after her finals were over, Hen still wasn’t sleeping enough. Hen and the 118 later responded to a ceiling collapse at a happiness conference and three retirees were trapped under the rubble. The three people were friends. They’ve known each other since the sixth grade. They only went to the conference because one of them was struggling with what to do after retirement. It was the guy struggling that was caught under too much rubble. It didn’t look good for him. Everyone assumed he would die once the rubble was removed and it turns out there was someone else they could save. There was a fourth person trapped. A young man working the event had been setting up chairs on the second level. And it came down to saving the kid or the retiree.

Hen posed the question to the retiree. He didn’t hesitate. He told her to save the kid. They did so and they saved the young man’s life, but the retiree died. He said he understood what life was all about now. He died at peace with himself and so it was just Hen who struggled with her decision. She wondered what she could have done to save both instead of just saving one. The retiree’s friends both made it. The kid made it. It was just the guy struggling with the retirement that died that day. Something that will probably haunt Hen. She hadn’t wanted to go for drinks after her shift and Buck wasn’t in the mood either.

Buck has been trying to figure out what would make him happy. He saw himself in that poor man that died and he thought it was so unfair for the man to realize the secret of happiness right before dying. Buck was feeling this loss. He was struggling with it. He tried getting answers from Hen and she just didn’t have it in her to provide him any. Hen instead went straight home. She found out that she missed picking her son up from school. He had an activity planned. Thankfully, Hen’s wife got him and took him to the robotics meeting. She also took Hen to task for forgetting their son. And Hen felt so bad about it that she just broke down.

That was the moment that Hen realized she couldn’t do it all. She went to bed and she slept for almost a full day. When she woke up, she told her wife about almost getting into a car crash. And she also told her how she failed her neurology test.

And Athena also got some news. She hired a contractor to fix the damage to her parent’s place and both the old family friend Junior and Bobby were digging up the concrete when they found a body. The body of a child. Remember when Athena said she became a cop because a little girl went missing in her neighborhood? Well, they finally found the little girl.