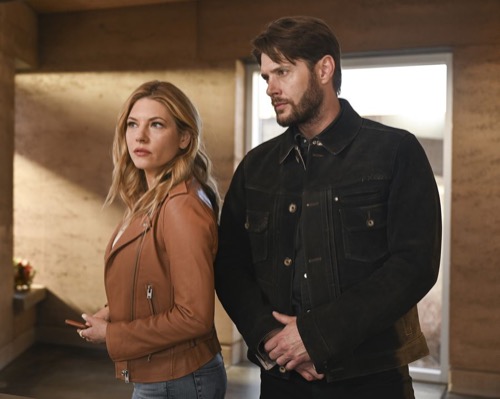 Tonight on ABC their new thriller by David E. Kelley, Big Sky airs with an all-new Thursday, May 19, 2022 episode and we have your Big Sky recap below. In tonight’s Big Sky season 2 episode 18 ‘Catch a Few Fish,’ as per the ABC synopsis, “In a struggle between head and heart, final resolutions are made as Jenny works to find Travis before he reaches a dangerous point of no return; meanwhile, Ren and Jag find a new familial bond and decide together how to handle their father now that he’s crossed a serious line.

After receiving a startling surprise from Scarlett, Cassie changes the course of her quest for justice forever. Later, with Tubb out of commission for the time being, a new sheriff comes to town; and after getting fully acquainted with Cassie and Jenny, it seems like he may just stick around for a while.”

Tonight’s episode begins with Scarlett at the train station with Phoebe who tells her that she is hungry. They go to a locker and Scarlett takes something out and puts it in her pocket.

Ren and Veer are at the hospital, they go into Jag’s room together. Veer goes to console Jag and he pulls away, he tells his father that he almost got him killed. Jag says their father gave up his life for his, he left him there. Ren says all the talk about family was a lie, he tried to abandon his son. Veer says they need to know who is in charge and Ren says she does. Veer leaves the room and Jag tells her to be careful, she tells him to rest up and leaves, and she is furious.

Cassie is walking in a parking lot to the community center when a guy is having issues with his truck, she goes over to help him, his name is Beau Arlen. He says he knows about her, a small town. He was in law enforcement, in Houston. He is there to step in for Tubb. He says he can handle Jenny Hoyt, she tells him good luck with that.

Mark arrives in the office, he is rushed back because Scarlett called Cassie and he is worried that she might show up there. He thinks the syndicate are after Scarlett. Denise shows him a photo of Julian McGill, the EMT who worked on Wolf when he died. According to the hospital paperwork. Julian hasn’t been showing up at work and there is no answer on his phone.

Cassie goes to see Jenny who says that Travis is ghosting her. Cassie says she bumped into Tubb’s replacement, he is very Texas. Cassie tells Jenny to arrest Veer, take away Travis’ target and maybe he will show up.

Travis picks up Veer from the hospital, Veer tells Ren to get into the car and stop this nonsense. Travis pulls out his gun, Ren slaps the truck twice and tells her father that she loves him. Travis drives off with Veer.

Jenny is in the station and Beau calls her darlin’ and she says give me a break. She tells him that she needs his help with the Bhullars. She says she thinks Travis is going to kill Veer Bhullar and she needs to stop it.

In the truck, Veer tells Travis to name his price and Travis says he doesn’t want any money. When Veer calls him Stone, he says that is not his name.

Cassie and Marl go to Julien’s house and find broken plates and food strewn on the patio floor outback. They look around more and they find his body under a tarp, he is dead.

Scarlett and Phoebe go into a store and she recognizes the man who was after her. He notices them just as they are leaving and he shouts and starts to run after them. They hide in a warehouse and he finds them. Scarlett jumps him and he falls down, he tells her she will never be safe, there are many more of them. She stabs him and he is dead. Phoebe shouts that she is scared and doesn’t want to do this anymore.

Ren is home, Donno is there and she tells him that Travis has his father. She thinks Travis is going to kill her father because he did something to one of his girlfriends. Dunno asks if Travis just gets to walk, she says no, that is where he comes in, he says good, he has been waiting for this. Jenny and Beau show up, she asks where Veer is, she has an arrest warrant for him. Donno tells them to leave and Beau punches him in the throat, Donno falls to the floor. Ren says Travis has Veer. She gives up her father and gives the location, saying he would do the same to her.

Travis brings Veer to the trap door to the cellar and demands to know what he did to Kate Garza.

Scarlett drops off Pheobe with Cassie and she asks her mother-to-mother, to drop her daughter off with her family. This is all she asks. She then tells her to look inside Pheobe’s backpack. She does and she finds a small box that says Milton on it.

Ren tells Alicia that she is taking over the entire operation. She says she is more than a financial advisor, Veer gave her power of attorney for the whole business. She filed them in triplicate and has a few contingencies in case she were to end up dead. She tells Ren to buy her out or work with her.

Jenny and Beau are racing to get to Travis. They find his truck and both get out and start walking fast. Back to Travis, Veer says that he put Kate’s life in danger, he is a coward. Travis wants to know what he did to her body and he says so many things. Travis hits him across the face with his gun and then starts punching him in the face. Veer says Kate is alive, and he will never tell him. Travis hits her again and again until Jenny shows up and tells him to get off of him. Beau checks Veer, he has a pulse but it is weak. Jenny handcuffs Travis, he tells her that Kate is alive.

In the pickup, Travis asks Jenny if she would have shot him, and she says maybe. He tells her that he tortured Kate, he said she is still alive. She pulls over, takes off his handcuffs, and tells him to find her, and when he does, he has to turn himself in. He gets out and leaves.

Phoebe is watching cartoons, Mark is there, and she says that Scarlett gave her information about the syndicate.

Veer is in the hospital, he is alive. Jag goes in to see him and closes the blinds. Jag stands over him and Veer says, my son. Jag grabs his pillow and covers Veer’s face and smothers him with it until he is dead. Ren comes into the room and takes Jag’s hand away and says come on, they leave the room.

Alicia is leaving, she is going to London. Tonya is there and Alicia says tell Ren I didn’t say goodbye and laughs.

Ren is with Jag who is leaving the hospital. He tells her that he loves her, and then he hugs her.

Denise, Mark, and Cassie are looking at the file that Scarlett gave them but it is encrypted. Jenny walks in and she says she will fill Cassie in over a beer.