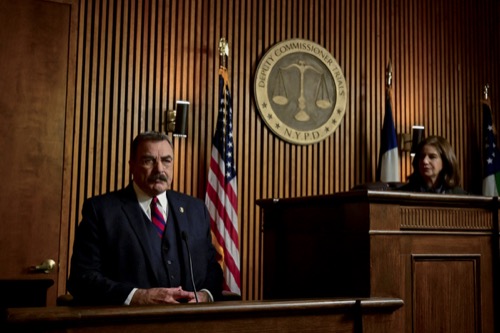 Tonight on CBS their hit drama starring Tom Selleck Blue Bloods airs an all-new Friday, January 14, 2022, episode and we have your Blue Bloods recap below. On tonight’s Blue Bloods Season 12 Episode 11 “On The Arm,” as per the CBS synopsis, “Danny pursues Dickie Delaney (Jimmy Buffett), a con artist pretending to be the legendary singer Jimmy Buffett, after he’s tricked into paying for the scammer’s meal at an expensive restaurant.

Also, Frank investigates NYPD Captain Terrell (Regina Taylor), who is using her badge to get free wares from local stores; Erin worries about her reputation when she’s the subject of a salacious, anonymous police blog; and Jamie introduces a decades-old saluting rule in the precinct.”

Tonights Blue Bloods episode begins with Frank, he is in his office with Sid who says the cop in question is a thirty three year vet and a decorated captain, Terrell. Garrett and Abigail are there as well, Sid says the woman is “taking food and drink on the arm.” A tip came into IAB, came to Sid as a courtesy.

Tony walks up and some employees are laughing about the Regans, a gossip site is making fun of Erin, “the only thing bigger than her ego is her feet,” and there is much more.

Danny is out to dinner with Maria for her birthday when he sees a man at the bar that he believes is Jimmy Buffet. Maria tells him to go over and say hi. Danny goes up to him and says hi, Jimmy says thanks for listening and thanks for coming out. Danny goes back to Maria and says he was really nice. Danny takes care of Jimmy’s tab, then orders for Maria.

At the station, Danny is surprised how expensive Jimmy’s tab was. Maria says that after Danny met Jimmy, she googled him and he was doing a concert in Austin straight through a rain storm. So, he couldn’t be in New York last night. Danny says he got scammed and he wants to find the fake Jimmy Buffet.

At roll call, Jamie tells the cops that they have to salute the front desk from now on, it is an old rule that hasn’t been used in a long time, but he get the ok from his boss to reinstate it – the cops are not happy about it.

Frank calls Terrell to his office, she says she donates the goods to vets. Franks says it is admirable, but the way she gets the stuff is the problem. Frank says she has their respect for her intentions, but her methods have to stop. If she doesn’t they will give her a command discipline. Frank tells Sid that he wants to keep internal affairs out of this.

Erin reads more of the nonsense on the gossip site, she tells Tony that everyone is laughing at her. Tony tells her they are going to get to the bottom of this he has a cyber security team on it.

Frank returns to the restaurant to ask questions, he tells the waitress that Jimmy Buffet last night was a fake. She invited him to her apartment afterwards and said that he was the perfect gentleman.

Eddie tells Jamie at dinner that she doesn’t know why he is doing what he is doing, he is picking a fight. He is picking up a rule from a hundred years ago, it is super formal for no reason. He says he thinks the little things add up to the bigger things. She asks if it is worth it, being hated by every cop in the house.

The next morning, Tony arrives at work and Erin is already there because she was called in, they found the IP address for “In Charge” man who has been writing everything about the Regans on the gossip site. She tells Tony it’s him.

Danny is down at the beach and he finds his Jimmy Buffet, he asks him for ID. Jimmy’s ID says Dicky Delany from Savannah, Georgia. Danny tries to arrest him and Dickie pulls out a fact sheet and shows him that he didn’t defraud anyone, Danny is frustrated and walks away.

Tony is walking with Erin and he says it wasn’t him, he would never say those things about her and her family. All of a sudden Erin starts getting messages on her phone, on the front of the paper Tony is outed as In Charge man, she looks at Tony and says she thinks Crawford did this.

Jamie writes up Badillo for not saluting him twice, and in doing so, Badillo loses a vacation day. The cops are discussing it in a room and they are not happy about it and making jokes about what does Eddie see in him.

At dinner, Eddie loses it with Jamie, she tells him that at work he is seargant stick in the butt and his resurrecting something from a hundred years is affecting her.

In court, Terrell shows that select discounts are offered by merchants to police offers. Frank says the moment you show your shield and ask for a discount, it is an implied demand. Frank and Terrell go head to head, the judge says she has all she needs and will send her recommendation to the commissioner’s office.

Erin goes to see Garrett, she says Tony has now been dragged into the problem. He tells her that this is probably because she is running for DA and Crawford is behind it. He tells he to keep quiet and he will look into it.

At Sunday dinner, Erin says Jimmy Buffett was the first concert she ever went to. Danny says his first concert was Kiss, he snuck out. Frank reveals that he has never been to a concert, he his wife preferred to make their own music. Danny calls him smooth.

Danny is in the station when Jimmy Buffett comes into the station to see him, the real one. Jimmy wants Danny to find the fake Jimmy, so they can have a little chat.

Garret goes to see Tony and Erin and asks if they know Ashley Adams, she is a new intern. She is the mayor’s cousin and she is an intern by day and hacker by night. Neither of them were the target, Frank was. Garret says they want her to stay where she is and when the time is right, they will funnel false information to her.

Danny brings Jimmy to meet Dickie, he tells him he went too far this time trying to scam a cop and he needs to pay him for the dinner. Jimmy tells him to take a year off, then asks about the family and tells him to give them his best. Jimmy tells Danny this has been going on since the mid 80’s give or take, he does this a few days here and there but he has a hard life, so he doesn’t mind.

The court found for the PC, Garret asks Terrell if she is going to cease and desist – Frank tells him to leave them alone for a minute. Frank then asks Terrell what is the real reason. She says she is a black woman who sense of pride and purpose in a job as a cop is shunned. The disrespect, suspicion that even her friends and family treat her with these days, has ground her down. She takes off her uniform and she is still wearing it in their eyes like she is a traitor. What she is able to do for the vets because she has a uniform, is the only reason she can put it on everyday. He tells to get discounts, no more handouts.

During roll call, Espinova says that a cop impersonator tried to get in the other day, but thanks to Regan for bring back the salute, he was able to see that the man was a fake. The cops all clap their hands and cheer for Jamie.