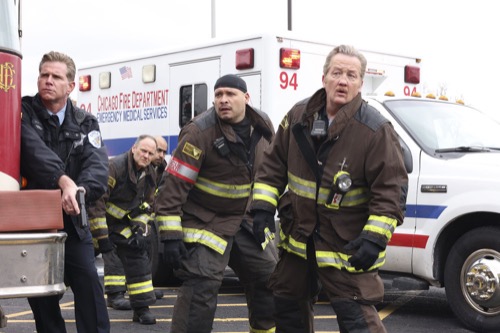 Tonight’s Chicago Fire season 10 episode 18 looks like it is going to be great and you won’t want to miss it.   While you’re waiting for our recap make sure to check out all our Chicago Fire recaps, news, spoilers & more, right here!

Chief Boden went to go grab some groceries when he, unfortunately, became a hostage. The day started out just fine. Boden was going to go around checking stations and making sure everything was running like it was supposed to be. But he also needed some things from the store. He stopped by looking to grab a few things when a guy crashed into the store and he had a gun. He took everyone inside hostage. This included Boden. Boden noticed that the man with a gun had a nasty wound that was bleeding and so Boden announced himself. He said he was a firefighter. He said that he had paramedic training and that he could help him. And that was enough to earn some brownie points.

The guy agreed to let Boden treat him. He also let Boden check on the others. It turns out their hostage-taker had hit a woman with his car and she had a very badly broken leg. But she had a pulse. Boden offered to treat her and the guy with the gun allowed him to do so. Boden with the help of Cheryl helped set the leg. He also got help from a lawyer. It turns out the guy with a gun was named Will. Will escaped prison. He was apparently the lookout guy for a convenience store robbery and he got charged with the full offense for the part he played. He got eleven months. He was in there for a mere few days when he got jumped by the Latin Kings.

They cut up his back. Will got sent to the hospital and he told the guards that he couldn’t go back, but they ignored him. They were going to put him right back in prison. Something that Will now feared more than anything. He then broke out of the hospital by grabbing a car and he crashed that car into the supermarket. Hence the hostage situation. There was a lawyer in the place and he warned Will that no one could die in his “care”. If someone does, Will is looking at causation which would be a murder sentence. He could be in prison for the rest of his life no matter how long that may be.

With the lawyer’s help, Boden got Will to agree to release two hostages. The woman with the broken leg and a guy to help her walk out on her good leg. But no sooner did he do this than Will heard someone moving in the back of the supermarket. Will almost shot two people hiding in the back. Boden stopped him. Boden was someone that Will trusted because Will knew that Boden wouldn’t risk anyone else and so he sent Boden to go check for more people in the back area. Boden supposedly went to go do so. He found people and he told them to stay hidden. They would have escaped only the loading door was stuck and so Boden bought them time.

Boden went back to Will. He said he saw no one in the back. Will believed and so Boden decided to push Will into remembering he was releasing two hostages. Will released the injured woman as well as the lawyer. Just not before the lawyer got the payment and officially became his lawyer. Boden tried to get Will to release the rest of the women and Will wouldn’t. He wanted time to think. Boden has secretly been passing messages onto firefighters while this was happening and so his team knew he was in there. They hadn’t known at first. They simply saw his car on tv and thought he was assisting the firefighters until they heard from Boden. And realized that one of their own was at risk.

But Boden didn’t let his situation faze him. He tried to understand Will. To sympathize with him. He got Will talking about his family and wanting to see him. Boden was doing well until one of the hostages mouthed off about prison not being tough enough. This ruined all the good work that Boden was doing. Boden got help from Bob the lawyer again. Bob radioed in. He reached out to Will. He told him that he worked a deal and that he wouldn’t face life in prison if he walked out now before anyone was seriously hurt. Boden saw Will during this conversation. He saw how Will was going to turn himself in until he heard from one of the hostages.

Someone had died. They died from a gunshot wounds. Boden realized it didn’t come from Will’s and that it had to have happened from friendly fire. But it didn’t matter. Not in Chicago. Will was going to be blamed for someone getting shot and so he was going to commit suicide by cop. He went out there with his gun. He wanted them to kill him and the plan wouldn’t have worked if Boden hadn’t tackled him from behind. Boden stopped Will from dying. He also told the cops that the body wasn’t from Will. He even threatened the cops to make sure they told the truth about what happened because Boden was prepared to testify to that fact.

Will was going back to prison. For now. He has a good lawyer and he might not be overly punished for what he did today because that was panic. Not a true hostage situation. Boden was there to support him and Boden’s team was there to support Boden. And the team later learned that new paramedic Emma was lying about her history, so there might be more problems in the future.