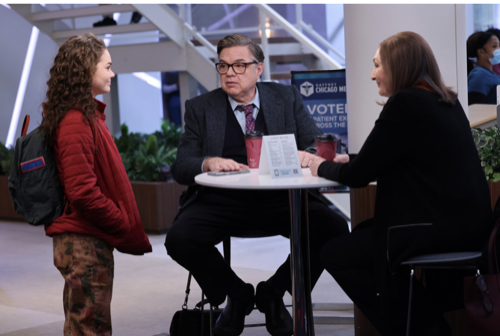 Tonight on NBC their medical drama Chicago Med airs with an all-new Wednesday, May 18, 2022, episode, and we have your Chicago Med recap below. In tonight’s Chicago Med season 7 episode 21 called, “Lying Doesn’t Protect You From The Truth,” as per the NBC synopsis, “Dylan and Ethan treat a patient shot during a drug raid. Charles and Vanessa work together to properly diagnose a motivational speaker. Will and Hannah must turn to Crockett for help with a patient who’s pregnant.”

Tonight’s episode begins with there being something wrong with Dr. Blake’s hands. They were fine when she had them at rest. It was only a problem when she pinches the fingers together and as a surgeon, she needed to be able to do that without her hands shaking. She messed up on her most recent surgery. She was afraid of it happening again. She started doing physical therapy to correct the tremor, but she didn’t want to give up on doing surgeries. She was a transplant doctor. She saves people’s lives each and every day. She had a long line of patients and so she didn’t think it was so bad that she had to take time off. And that’s something Crockett didn’t understand.

Crockett was more than just her second in command. He was her boyfriend. They were dating. He cares about her and he wants her to focus first on herself before she goes back to doing surgeries. But Blake said she was fine now that she was doing physical therapy. She refused any other help. She went about her day and Crockett had to go about his. He and the rest of the hospital were put on alert after a cop got shot during a raid. The raid involved the Serbian mafia. Milena had been listening in on the raid with her boyfriend Dr. Scott when they overheard the police get ambushed and that one day was being rushed to Chicago Med.

Milena decided to break her cover as an undercover cop. She went to the scene while Scott went to the hospital. He was later one of the doctors on the cop’s, Sam’s, rotation. Scott was the one to check Sam’s ultrasound. He noticed that there were two bullets inside of him. Not just the one. The doctors asked Sam about it and he said this was the first time he’s ever gotten shot. Scott and Dr. Choi also viewed the bodycam footage. They saw Sam only get shot once. They, therefore, had no clue where the second bullet came from. They did a search of Sam’s body while they did surgery to remove both bullets. They found a second wound.

It turns out Sam had been shot before. He just denied it because his wife was in the room. He hadn’t told her that he had been shot before because the bullet had been too dangerous to remove. Or it was then. It’s since moved since his latest shooting and so they were able to remove it now. But the wife found out. Alice was so upset that she told him that the doctors could tell everything to his friends on the force because those were the people that Sam most cared about. Alice then stormed out. She went for a walk and, by the time she returned, her husband’s condition had taken a turn for the worst. He needed to be rushed back into the OR.

Elsewhere in the hospital, Crockett noticed that Blake failed to button up her shirt. He realized she couldn’t do it with her hand tremors and so he put a stop to her surgery. He didn’t want to, but he told her that he couldn’t allow her to do surgery with her hand in that condition and so that was it. She was done. She was also angry at Crockett. Crockett meanwhile helped Dr. Asher with her patient by performing a liver biopsy on a pregnant woman. The woman was suspected of having an acute fatty liver. Which means she has to deliver. It was early in her pregnancy. She was only twenty-six weeks and so while her baby was viable. It wasn’t great being born that early.

Unfortunately, Cat did have acute fatty liver. She was rushed into the OR where her baby was born not breathing and she was left hemorrhaging. They were able to stop the bleeding. But Cat was going to need a new liver. Either a new or a partial one from a living donor. Her mother had been at the hospital and so she agreed to become a living donor. Blake couldn’t perform the surgery. Crockett had to do it. He was unsure at first and so Blake had to give him some advice to get him to focus on the patient in front of him. It was a simple bit of advice. It was just “stop chasing the bleed”. Crockett did just that and he was able to get a livable piece of the liver to give to Cat.

Cat was able to meet her daughter. Her daughter was on a ventilator, but she was breathing now and that’s all that matters to her mother and grandmother. Dr. Taylor was an adopted child who got to meet and know her biological mother. She was now curious about her biological father. She asked Maggie to contact him and Maggie said she’d try. Only she didn’t really try. She was afraid to contact Grant Young. They were wildly passionate about each other as kids. So much so that she was afraid that if she contacted him that those old feelings would still be there. She admitted to that to Goodwin. She just wouldn’t say that to her husband.

Scott and Choi saved Sam’s life. They also showed his wife the bodycam footage in which Sam’s first words after he got shot were to ask his friends to look after his wife. Afterward, Choi visited his father’s secret gay lover. And the two of them just talked about his dad for hours on end.

Milena was fine. She needed to go off the grid for a while because her cover was blown and so she was staying in Halstead’s new apartment building. He was still fixing up the place, but no one would expect people would be living there. The only person who does was Asher. And she just made peace with Halstead, so she was going to turn on him now that he was helping someone else.