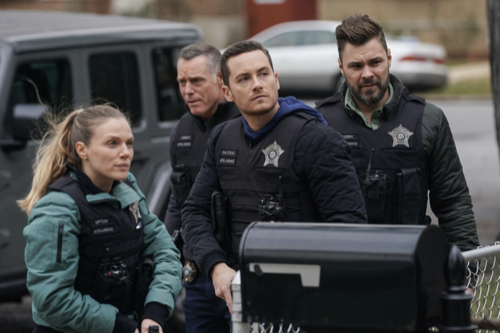 Tonight on NBC their drama Chicago PD returns with an all-new Wednesday, February 23, 2022, season 9 episode 12 called, “Still Water and we have your Chicago PD recap below. In tonight’s Chicago PD season 9 episode 13 called, “Still Water,” as per the NBC synopsis, “While out for a jog, Upton witnesses a horrible car crash and risks her own life to save the passengers. After learning more about the victims, the team must track down the man responsible for the brutal crash.”

In tonight’s Chicago PD episode, Sergeant Platt wanted to throw Upton a party. It was the ten year anniversary of Upton becoming a cop and Platt thought they should celebrate it with a party. Upton didn’t want one. She kept turning it down. She even wouldn’t let Platt get away with Platt saying she owes her a party.

Platt thought Upton owes because she saved Upton’s life when she was a little and that convinced her to become a cop or at least that’s what she was using to try to get Upton to have a party. But Upton was being firm. She didn’t want a party. She wasn’t going to cave and she said as much before she went on her nightly run.

Upton was later enjoying a nice run like normal when she witnessed a car drive off the road into the lake. Upton called it in and she jumped into the freezing water. She got the man out, but unfortunately she didn’t have enough time to return to the woman in the passenger seat and so that decision haunted her as she went to the hospital to get checked out herself. Upton heard while she was there when the doctors found a gun on the unidentified man. She also overheard when the woman’s husband kids came in. The husband was freaking out. Upton feeling guilty. She approached the husband and did her best to apologize for only getting one person out.

But the husband cut her off because he said his wife was alone. His wife had called him before she died to say she was going to the bank and he said his wife had been alone. The husband then began acting out once again and Platt stepped in to diffuse the situation. Upton just couldn’t let this one go. She checked out the husband’s story about his wife going to the bank and she found footage outside of the bank indicating that the man grabbed the victim whose name was Lisa and tried to rape her. When he became worried about being seen, he dragged Lisa into a car by gunpoint and drove off with her.

Upton didn’t just save someone. She saved a rapist and she unfortunately let his victim die. Upton had seen the woman in the car and Lisa had even grabbed her hand begging for help, but Upton was running out of oxygen and she wanted to save the guy’s life because she hadn’t known what he was at the time.

She chose to save him and now an innocent woman is dead. Upton and her squad went to arrest their kidnapper when they found out he disappeared from the hospital. He ran off not long after gaining consciousness. Upton couldn’t find him on the security cameras sneaking out. And so she and her team focused on how he chose Lisa as his victim.

They look into the security footage outside of the bank. They couldn’t find any signs of which direction the perp was walking from and to matters worse they found out that he had been stalking Lisa. He’s been following her for at least six months if not more than that. The perp followed her everywhere. He always did it on foot and there’s no cameras of him driving a car or getting on public transit. The perp was too smart for that. He only showed himself when he was waiting outside for Lisa to come out of wherever. And Lisa never noticed it because if she had she would have said something to her husband.

The only one who noticed this strange man following them was the little girl. The victim’s daughter Addy couldn’t be more than eight and she remembers the guy because he would always drive alongside them. He would even wave at the little girl. The tip she gave to the cops helped them more than she knew. The cops was able to get security footage of the guy in the car and they matched in to a license as well as the vehicle registration. They found their guy. His name was Blake. They went to his home address and they found the house empty. Blake had done a runner. But he did leave behind his trophies.

Blakes collected the underwear of everyone women he’s ever raped. He keeps int their own box in the closet along with other momentous. He was a serial predator and unfortunately he crafted a well-executed escape plan. They couldn’t find him. They put out a BOLO. They also dug deep into all of the victims and they found a connection. It was an athletic club. Blake raped his first woman there fifteen years ago and since then he uses the place to find his future victims. Upton became sure that Blake wouldn’t want to leave these women behind. Not after he stalked them and called it love. And so the detective went to the club.

It wasn’t long before she ran into Blake. He was hiding by the pool and they confronted each other. They got into a fight. They fought over Upton’s gun until she knocked him into the pool. He had hit his head first before he went in, but Upton wasn’t going to let him die now and so she saved his life for a second time. And after she did that – she broke it to Lisa’s family that they caught their guy.