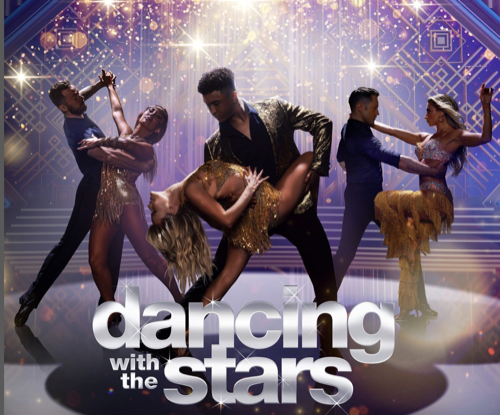 On tonight’s episode, the remaining six couples will tackle two individual dances on the first no theme night of the season – at the end of the evening two couples will be eliminated. That will send four couples to the finale. So sit back, tune in on Disney+ and enjoy a great show accompanied here by an amazing real-time DWTS recap!

In tonight’s DWTS episode the glitz and glimmer returns to the ballroom and we are in the semifinals.

Judges Comments: Len: “I wasn’t too sure about some steps but overall what a great way to start the show.” Derek: “I great first dance, but your shoulders rolled forward a bit. It was too angular. But overall a strong dance.” Bruno: “It was strong and stylish. You went from powerful to fluid.” Carrie Ann: “I love that you took a risk, you told a story and that is a risk in the semi-finals. Round yourself in, quicksteps can throw you off.”

Judges Comments: Judges Scores: Derek: “I love tonight, its a real ballroom competition. You have impressed and surprised us every week my friend. Beautiful lines and beautiful arms.” Bruno: “You really are Prince Charming, everyone is falling in love with you. You were sailing, the connection is beautiful.” Carrie Ann: “That was so special, I have a hard Tim finding the words. It’s authentic and nothing is forced.” Len: “I love the movement, a good mix of steps, it was seamless. I found it a little skippy some times and lacked finesse, but an overall good dance.”

Judges Comments: Bruno: “On the edge of my seat, it was like an episode of Game of Thrones. Talk about a drama queen. You missed a pass on hold. What a wonderful performance.” Carrie Ann: “It is so easy to love you. That had light and shade.” Len: “It was powerful dancing, I liked the solo section, high energy and like alway totally committed.” Derek: “It was almost perfection, well done.”

Judges Comments: Carrie Ann: “That was perfection on top of perfection, so powerful. You brought it to this dance floor today, it was beyond spectacular. Awesome job.” Len: “It just flowed across the floor, no words could sum up how good I think that was.” Derek: “You are the first celebrity to look like a ballroom dancer. I see the attention to the detail that you work on, we see every nuance.” Bruno: “You will go down in history, this was probably the best ballroom dance. The quality of movement, amazing.”

Judges Comments: Len: “It is amazing how strong you have become since week one. It lacked a little rhythm sometimes, the footwork was hit and miss.” Derek: “Len is right, it was a little flatfooted. But you have had an incredible journey, it was so much fan to watch you, well done.” Bruno: “It was very satisfying, you always give everything you can. Your footwork could improve.” Carrie Ann: “It was strong, clean and confident. There is a reason why we saved you so many times.”

Judges Comments: Derek: “I want the playlist for this episode. You did such a beautiful job capturing the essence of this song. Just flawless.” Bruno: “You looked like you stepped out of a dream. It was beautiful, you were on it.” Carrie Ann: “Something elevated this performance, you stripped down some walls, there is a new grace that is real and vulnerable.” Len: “You are truly a lovely dancer, that was a lovely waltz.”

Judges Comments: Len: “As always a polished performance. It lacked a little bit of content, but you give it everything you got.” Derek: “Your vocals were great, a beautiful dance. You are so fantastic to watch.” Bruno: “You are such a master story teller. You really approach a dance like an actor does.” Carrie Ann: “When you bring all that, you get a little bit of grace. You threw everything in and your grandma is saying well done.”

Daniel Durant and Britt Stewart dancing to the Samba to “Light It Up (Remix)” by Major Lazer ft. Nyla & Fuse ODG

Judges Comments: Derek: “Samba is the hardest dance. God bless you. That had so much content, so fantastic. I was in awe of the technique, well done.” Bruno: “You looked like you were enjoying that. It is one of the hardest dances to do and you did it.” Carrie Ann: “You had swagger, on top of that, the dance is difficult, you always take the obstacle and turn it into an opportunity.” Len: “Samba is such a difficult dance. It is always changing, and for you to cope, I think you are fantastic.”

Judges Comments: Bruno: “I love when you show your fragility, elegance, sophistication. A few things happened on the underarm turns, but it was beautiful.” Carrie Ann: (she gets up and bows to them) “You were exceptionally radiant tonight and that routine was straight from the heart.” Len: “It was lovely rotation, I thought the fluidity was beautiful. Your head occasionally tipped. Overall I just love watching you and so does this audience.” Derek: “You look amazing, I agree with Len, but beautiful dance, well done.”

Judges Comments: Carrie Ann: (she gets up to hug Charli and Mark) “Perfection is different on everyone, your perfection is at another level, it is unbelievable, mind blowing, I love it.” Len: “Everything Carrie Ann said, I am telling you that, both of you, that was fantastic.” Derek: “You have had exceptional moments every week and that is not easy. That was so special, iconic.” Bruno: “You captured the essence of the spirit of Spain.”

Judges Comments: Len: “What I like is that there was a nice amount of of in hold. It was a little skippy at times, but dancing has never come that easy to you, but I’ve enjoyed watching your progression.” Derek: “Well done, you are such a great partnership. Got a little skippy in the frame but great dance.” Bruno: “You looked like the dashing leading man. You worked very hard and you did very well.” Carrie Ann: “This partnership has been spectacular and special. You have done an incredible job for someone who has never done choreography before.”

Judges Comments: Derek: “That song was incredible. I felt nervousness from you, but then you were in. You absolutely sold it. So dramatic, I loved it.” Bruno: “Dramatic buildup to the full ending. Another great job Val, that was genius.” Carrie Ann: “This final is off the charts. I have never seen you dance with so much intensity.” Len: “I loved he attack, the stillness, the control at that speed was just fantastic.”

Time for results, two couples are going to be eliminated.

Combing the judges scores with the live votes, in no particular order, the following couples have made it right through to the finale: Gabby and Val, Charli and Mark, Wayne and Witney.

The couple with the lowest combined scores will leave right now, without the chance for a judges save and that is Trevor and Emma.

Shangela and Gleb, Daniel Durant and Britt Stewart, for one of them their journey ends tonight. It all comes down to who the judges wants to save.

Daniel Durant is eliminated along with Trevor and Emma.