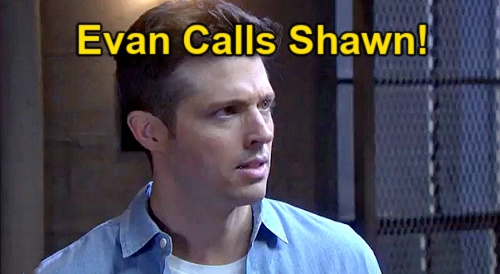 Days of Our Lives spoilers reveal that Shawn Brady (Brandon Beemer) gets a confusing phone call. During the week of July 4, Orpheus (George DelHoyo) will also try to keep Christian Maddox aka Evan Frears (Brock Kelly) in line. Could that confusing phone call be from Evan? Will Evan blow up both Orpheus’ and Jan Spears’ (Heather Lindell) schemes?

Evan felt that he should have been notified and at least gotten to say goodbye.

However, Orpheus was right when he said that Zoe has sole custody and doesn’t have to notify Evan of anything.

During the conversation, Evan talked about his regrets. Evan not only realizes his crimes stopped him from having contact with David but he was coerced by the devil.

Evan realized that instead of seeing an innocent baby, all he could think about was revenge. That is when Orpheus told Evan that he has a second son.

Evan was in utter disbelief when he learned that his prison infirmary passion led to Jan getting pregnant.

Evan was even more flabbergasted that Orpheus helped Jan with the paternity test, which led to Shawn believing he was the father.

All Orpheus would explain to Evan is that he needs Jan on the outside so he can put an explosive new plan in motion.

Days of Our Lives spoilers reveal that on Tuesday, July 5, Shawn receives a perplexing phone call.

This phone call could be from Evan. However, Evan must not be able to tell Shawn that he isn’t the father of Jan’s baby.

During the week of July 4, it is stated that Orpheus tries to keep Evan in line.

With all of Evan’s fatherhood regrets, he isn’t okay with someone else raising his son.

Evan has already lost David and might view Shawn Christian Brady as his second chance of being a dad.

So, Evan probably tries to call Shawn and is only able to get a few words out.

Knowing Orpheus, he will come up behind Evan and hang up the receiver before Shawn learns anything.

Despite Orpheus’ efforts to keep Evan in line, the young father isn’t like his father.

In the past, Orpheus has tried to control Evan only for the young man to go in the opposite direction.

If Evan could just find out Orpheus’ plan, he might not only save Shawn’s marriage but save Salem as well.