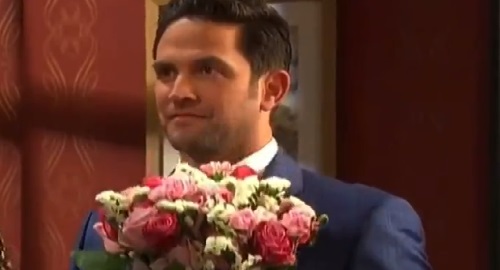 At the DiMera mansion, it looks like EJ will witness Johnny DiMera (Carson Boatman) and Ava DiMera’s (Tamara Braun) make-out session. That’ll no doubt bring another accusation from EJ, who previously accused Ava of seducing Johnny.

Of course, Johnny will rush to Ava’s defense once again and make it clear that he genuinely cares about her. EJ will still think Ava’s wrong for cozying up to someone young enough to be her son, but Johnny clearly doesn’t care about the age difference.

Over with Chanel Dupree (Raven Bowens) and Allie Horton (Lindsay Arnold), they’ll get some surprising news. Paulina Price-Carver (Jackée Harry) will admit she’s running for governor instead of Abe Carver (James Reynolds), so Allie and Chanel will surely wish her luck.

Other Days spoilers say Alex will bond with Stephanie on the job – or at least try to. Stephanie has been slow to warm up to Alex, but she’ll start to see that he’s not so bad.

Although Stephanie may turn down Alex’s invitation to get a drink together, they’ll both end up at the bistro at the same time. Stephanie will relent at that point, so she’ll drink with Alex and get to know him a bit better.

In the DiMera crypt, Gabi will initially think Jake DiMera (Brandon Barash) is the twin standing in front of her, but she’ll soon realize it’s Stefan instead. That’ll lead to Gabi planting a kiss on her back-from-the-dead soulmate, but Stefan will shove her away.

We should mention that Days will move to Peacock starting Monday, September 12, so you can check out the show there with a premium subscription. As other DOOL details emerge, we’ll bring you more updates.