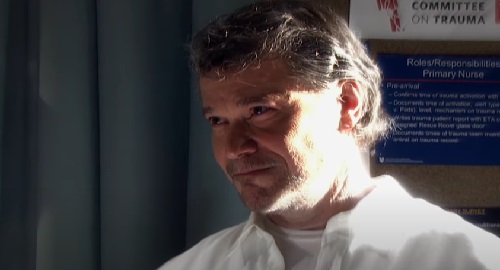 Days of Our Lives (DOOL) spoilers preview for the week of May 16-20 reveals that Peter Reckell will return as Bo Brady, so Ciara Brady Weston (Victoria Konefal), Ben Weston (Robert Scott Wilson) and Steve Johnson (Stephen Nichols) will get miraculous visits.

DOOL’s weekly preview video offers a first glimpse at Peter Reckell’s exciting return stint. Bo is certainly a fan favorite, so many viewers will be thrilled to welcome him back to the show.

Although Bo will only be around for a couple episodes, that’ll be plenty of time to make a profound difference for multiple characters.

Bo heard Ciara’s desperate prayer and couldn’t leave her to fight off the devil without him. Divine intervention will play a huge role in making sure Ciara’s able to reach Baby Bo Brady and get him out of the devil’s grasp.

Ciara will find herself bathed in white light, so she should realize she’s had some sort of angelic experience. Days spoilers say Ciara will finally hold her baby boy and free him from the pentagram at the cemetery.

However, another encounter will be brewing at the hospital later, so this will offer firm proof that it was Bo who intervened. Bo will be dressed in all white with a bright light surrounding him.

As Bo enters the room, Ciara will seek confirmation that Ben’s seeing what she’s seeing. It’ll be hard for Ciara to believe this is really happening, but Ben will offer a familiar nickname when he calls her “Little One” and reveals why he’s there.

Days spoilers say Ben and Ciara will get some amazing words of wisdom before Bo moves onto another visit. This next one could involve turning an impossible situation into a true miracle.

Tripp Johnson (Lucas Adams) will allow himself to get possessed in an effort to save Allie Horton (Lindsay Arnold), so that’ll bring an inner battle. When the devil orders Tripp to kill Allie, he’ll manage to throw himself out of St. Luke’s loft instead.

Tripp will take quite a tumble out the tower window, so that’ll lead to serious internal injuries. Although Kayla Johnson (Mary Beth Evans) and her medical team will work frantically, Tripp won’t survive.

Soon after, Days spoilers say Ava Vitali (Tamara Braun) will rage over Kayla’s inability to save her son. Ava will be absolutely devastated along with Steve and Kayla, but there’ll be nothing anyone can do – nothing any mere mortal can do anyway!

When all hope seems lost, Bo will appear to a crying Steve and catch him off guard. Another dose of divine intervention is looming – and it’ll affect Tripp’s future in a big way.

Bo may reflect on the times that Steve saved his life and repay the favor by giving Tripp back his own. It looks like Bo will perform a miracle by reviving Tripp, so things are about to get wild on the NBC soap!