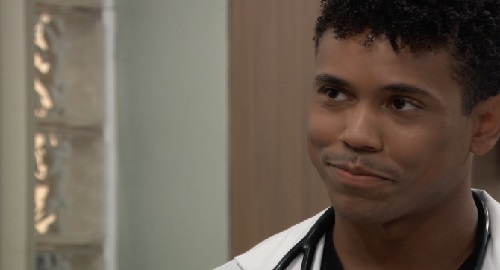 At the nail salon, Carly Corinthos (Laura Wright) and Josslyn Jacks (Eden McCoy) wrapped up their mani-pedi as they discussed the upcoming visitation hearing and the scathing story that was just published regarding Nina Reeves (Cynthia Watros).

Josslyn expressed concern for Willow Tait (Katelyn MacMullen) considering all the Harmony Miller (Inga Cadranel) drama and her new biological parent mystery. Carly flashed back to DNA test talk, but she kept Joss out of the loop on Nina potentially being Willow’s bio mom.

At the Quartermaine gatehouse, Dante Falconeri (Dominic Zamprogna) showed up with Sam McCall (Kelly Monaco) and revealed the results of the DNA test the PCPD ordered. Willow found out for certain she wasn’t Harmony’s biological child and agreed to attend the fair with Sam as a distraction.

Although Willow seemed overwhelmed, Sam insisted she’d help Willow and they’d find her birth mom together if that’s what she wanted. Sam just had to make sure Willow was OK with possibly not liking the answers she found.

Back with Dante, he did his best to push Michael toward making amends with Sonny. Dante explained why Sonny truly cared for his family and felt that no one was perfect – not even Michael.

However, Michael refused to budge and argued that Sonny had to fall for the Corinthos name to rise up. After Michael vowed to take everything from his father, he added that there’d be nowhere to hide the next time the PCPD came calling.

In the main Quartermaine house, Leo Quartermaine (Easton Rocket Sweda) assured Olivia Quartermaine (Lisa LoCicero) that he’d practiced his poem enough. Ned Quartermaine (Wally Kurth) helped Leo put his tie on and vowed to catch up with them in time for the fair performance.

Brook Lynn Quartermaine (Amanda Setton) spied before cornering Ned alone and bickering with him over business. Ned felt that Michael and Drew Cain (Cameron Mathison) must’ve gotten to Brook Lynn, but he explained why he was angry about being pushed out through the merger.

Brook Lynn finally convinced Ned to just concentrate on Leo since this was a special day for him, so Ned put his ELQ and Aurora Media concerns aside.

At Kelly’s, Valentin Cassadine (James Patrick Stuart) wanted Martin Grey (Michael E. Knight) to earn his retainer and tell him out to keep company control. Martin felt that would be difficult against a united Quartermaine family.

When Olivia showed up with Leo, Valentin sent Martin to buy the kid a doughnut. Olivia thought that was generous considering the conflict that might bubble up surrounding the merger, so Valentin had to pretend he already knew about it.

Once Valentin was alone with Martin again, he began to view pushed-out Ned as a potential ally.

At GH, TJ complained to Jordan Ashford (Tanisha Harper) about Curtis Ashford (Donnell Turner) driving Marshall Ashford (Robert Gossett) out of town. Since TJ wanted to find Jordan, she advised him to take a closer look at the clarinet case Marshall had offered.

TJ discovered a Brooklyn music shop receipt that was recent and decided he’d be taking a trip to there to see the shop owner.

At Crimson, Nina was as busy as ever and acted like the published story wasn’t a big deal. Curtis felt Nina was trying too hard to be OK and got her to open up about her concerns about the hearing.

If things went badly in court, Curtis thought Nina could turn things around on the mob boss, but Nina didn’t seem interested in that strategy. Nina also found out about Marshall leaving town, so she wondered if Curtis could really live without his dad now that he’d gotten to know him.

At the fair, Sonny left a supportive voicemail for Nina before Drew gently confronted him about the war with Michael. Since Michael was determined to make Sonny a distant memory for Wiley Quartermaine-Corinthos (Viron Weaver), Sonny intended to put a stop to that.

Drew hoped maybe he could play mediator, so Sonny wondered if Drew knew something that could help him put the family back together. If Drew did, Sonny wanted to know what it was.

Drew didn’t mention anything about the DNA test Carly ordered. Instead, Drew brought up the fight against Valentin, so Sonny wanted in on that battle and refused to let Michael go into it without backup.

After Drew steered Sonny away from helping, Sonny delivered a fierce warning. If Michael let a family disagreement escalate into something worse, then Sonny felt his son would need all the luck he could get.

Once Ned and Brook Lynn made it to the fair, Leo greeted BLQ excitedly – though he was concerned since Harrison Chase (Josh Swickard) hadn’t arrived yet.