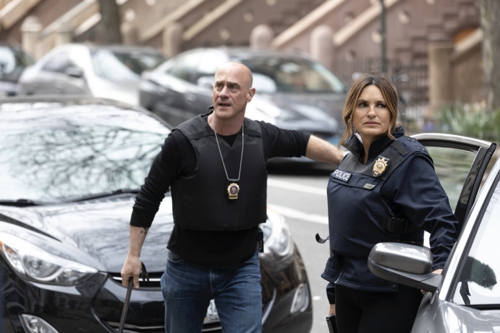 In tonight’s Law & Order Organized Crime episode, Sergeant Bell and her team were assisting SUV in tracking down an abducted girl connected to the Brotherhood. The girl was innocent in all of this and Sarah Santos needed to be found fast. She suffers from asthma. Stress could bring on an attack. She didn’t have an inhaler when she was taken. Sarah could have any attack at any moment and possible die from her asthma if she was treated. But finding Sarah was difficult. Sure, she had a connection to the Brotherhood which meant she could have been taken in retaliation of some money being stolen only she was a little girl. There could have been plenty of other reasons why she was taken. And none of them are good.

Sarah was abducted in broad daylight. She was lured to a car by a woman with a dog. The woman waited until she was close enough for her male partner to come out of the car and grab Sarah. Both the man and the woman wore hats covering their faces. They also knew to act fast. This wasn’t their first time doing this and they could be a part of a human trafficking ring or simply pedophiles operating in that part of the city. Bell and her team didn’t know which. They instead had to find Sarah using other means and they first looked into anyone connected to her school. And that’s how they found Ted Taylor.

Taylor was a registered sex offender who worked as a custodian. He got put away for two cases of statutory rape and his wife stuck by him. The two were even still married. She was either willfully blind or an accomplice. The team tracked down Taylor. They questioned him. He denied any part in the abduction. He also said that Sarah’s father received a beatdown not far from the school. Stabler went to go to talk to Jessie in prison. Jessie said the beatdown from a gambling debt he owed. Only, he paid off that debt. There should be no reason why they would come after his daughter and so then Jessie asked if Donnelly had anything to do with it.

Stabler asked him if that’s who he thought would take Sara. But Jessie didn’t have an answer to that question and so Stabler went go see Donnelly. He had to update him anyways because he was undercover as a friend of his. Donnelly trusts Stabler so much that he named his newest son Frank Elliott Donnelly. He trusts Stabler without a debt and the whole time Stabler was spying him. He was spying on him while also claiming to be one of his spies. Donnelly asked about the case. He also asked why Stabler had been assigned this one and so Stabler worked into the conversation that he worked with Captain Benson. And that the past relationship is good because it meant she trusts him.

Stabler also put a tracker on Donnelly’s car while he was in the neighborhood. He saw the moment that Donnelly visited Sarah’s mother and so he went to the mother with Benson as his backup. They questioned Rosaria. They asked her why Donnelly stopped by? She said she turned to Donnelly for help because she received a ransom demand and the demand said no police. Rosaria had needed a hundred thousand dollars in cash. She asked Donnelly. He came up with the money. Benson and Stabler had asked to see the video that the kidnappers sent and the video had a gun on Sarah while she asked for the money. And sadly she was struggling with breathing while she repeated the script.

But the team was getting closer to finding her. They were able to identify the sneakers that female kidnapper wore and those shoes were only sold one place and to ten women before they sold out. They then found Stacy. The police found out that Stacy had a boyfriend named Ramon who was in a gang and the gang turned out to be cartel. Jade did a search on cartel houses matching what they saw in the ransom video. They tracked down the house in Queens. They went there and they found Sarah. She was hidden in a secret compartment in the walls. They also found Stacy and they shot Ramon after he tried shooting at them.

Sarah received medical treatment. She was also given an inhaler and so she was going to be fine. Stabler later brought her to the prison to see her dad. Jessie felt reassured after seeing her in person. Jessie also admitted to his connection to the Rebenga Cartel. It was the cartel who kidnapped Sarah and they only did so because of Donnelly. Donnelly robbed the cartel. He stole a hundred k from them without any word to his people. His people then got the blamed because the Brotherhood was all painted with the same brush. The cartel therefore demanded that Jessie pay and that’s why he received the beatdown.

Jessie hadn’t said anything because he figured Donnelly would fix the mess he made. Only, now everyone is doubting Donnelly can protect their people and so Jessie told Stabler he was willing to wear a wire. And Stabler was thinking that wouldn’t be enough until he heard that the money Donnelly gave Rosaria was actually money they used to pay Ulrich.

Donnelly robbed Ulrich and he’s setting Stabler up to take the fall. Its what he does.