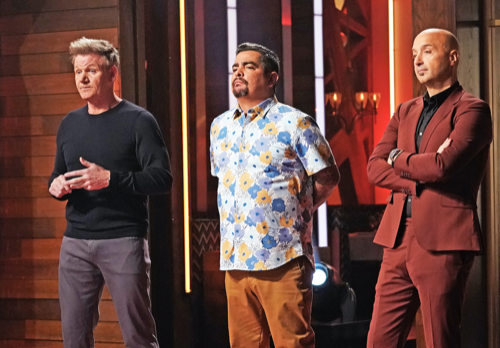 Tonight on FOX Gordon Ramsay’s Masterchef returns with an all-new episode on Wednesday, August 17, 2022, season 12 episode 12 & 13 called “Tag Team/GrubHub Challenge,” and we have your weekly Masterchef recap below. On tonight’s Masterchef episode as per the FOX synopsis, “As the top 12 chefs approach the halfway point in the competition, they’re challenged to a tag-team cook-off.

They’re tasked with choosing a partner and cooking three menu items from Gordon Ramsay’s Michelin-starred restaurants, taking turns against the clock. Next, in order to secure a spot in the top 10, the remaining chefs partner with GrubHub to elevate a traditional take-out dish into a gourmet concoction.”

In tonight’s Masterchef episode, it was a night crafted for the Tag Team Challenge. The first challenge of the day was the Tag Team Challenge and that’s when two chefs prepare and cook a dish both together and separately. How can that be possible? Well, it happens when one chef has to tag in the other while they sit out for a certain amount of time and they switch it around until the final time is called.

It was basically in the name yet some many struggled with it. Willie went home back on his season when he failed this challenge and everyone knew that someone was bound to be eliminated tonight what with this challenge rearing its ugly head again. And there was also some shakeups.

Michael has the Immunity Pin. Typically, that should have meant he was safe from cooking tonight and yet he still had to go down on the kitchen with the rest of the chefs because there was an uneven number. Michael therefore cooked tonight. He was also safe tonight thanks to that pin. The chefs got to pick their own tag team partner.

Willie didn’t go back to Christian. He instead chose someone else. Christian did the same. Christian surprisingly partnered up with Brandi of all people. They were both headstrong. They didn’t like being doubted or yelled at. Not that it stopped them from doing to other people.

But the keys to success tonight was in the communication. Each and every party had to keep that line of communication open and they also had to know what they’re doing. Bowen partnered up with Shaniqua. They’ve worked together in the past. They each thought that their past history would ensure they can work together tonight only they were all over the place. Bowen couldn’t guide Shaniqua when it was her time to cook.

She was asking for directions. It was clear that he didn’t know the menu nor did he know how to assist Shaniqua. There was a lot of yelling involved. These two really shouldn’t partner up ever again because they were arguing so much and so it was a miracle no one got hurt when the time was called.

Up first was Willie and Amanda. Their risotto looked undercooked. It tasted undercooked. Their beef wellington had great tasting meat, but the dough was raw. There were a lot of technical mistakes all across the board and so thankfully this pair weren’t the last. Fred and Dara also had a bad night.

There was an issue with each dish they prepared. They didn’t taste the broth in this, they undercooked the dough on that, and the glazed pears. Brandi and Christian were even told the seasoning was on point. It was just everything else that needed work. The team work that was the best of the night just happened to be Shaniqua and Bowen.

Those two truly delivered. If anything the judges wishes their more of the glazed pears. Michael and his partner Derrick were the best of the night. They came down as part of the winner circle. Joining them was Shaniqua and Bowen. Only one pair could get an Immunity Pin.

The pairing that won that pin tonight was Shaniqua and Bowen. They did great work. They pulled off some surprisingly wins in spite looking so frantic in the kitchen. Emily and Gabriel were the worst. They were in the bottom with Daya and Fred. Only those last’s dishes were at least better than what Emily and Gabe slopped out. And so the judges had no problem with eliminating Gabriel.

Gabriel had a strong streak in the competition. But he’s been losing his voice in the competition for a while and he never stood out in a great way. Gabe was eliminated. Emily got to fight on another day. She joined the others in the top eleven only there was no rest for the chefs. They later returned to the Masterchef kitchen to prepare another dish for some unknown challenge when they figured out that the doors to the kitchen were closed. The contestants had been locked out. They were locked out because judges wanted to make an appearance. They came in driving a motorbike. They also came with packages.

Those packages were the challenge. MasterChef wanted to celebrate the food delivering service called “Grubhub”. To honor Grubhub, the judges delivered food items to the contestants preparing dishes tonight. Those same contestants have to elevate whatever takeout they were given. This was hard on Brandi. She was given chicken and waffles. It sounded simple. She was from the south and yet she had no idea how to elevate such a simple dish. She struggled in the kitchen while others decided to get creative. Fred was given spaghetti and meatballs. He instead was going to make meat dumplings in a deconstructed sauce.

Willie got orange chicken and rice. He chose to make an orange chicken and rice meatball that he later served in an apricot sauce. Emily wanted her revenge. She was in the bottom twice recently. She doesn’t want to be in the bottom again and so she came out cooking in a vengeance. She, Fred, and Dara all had something to prove tonight. Fred’s dish was all about last minute details. Something that Ramsay tried to warn him against, but Fred kept saying he had this and no one wanted to doubt him. Only Ramsay told his fellow judges that either Fred joins the top three or he’ll be in the bottom three depending on what his dish actually tasted like.

Shaniqua and Bowen were watching everything from the balcony. They saw Fred struggle with making his noodles and from what they saw – they thought he needed extra help. It got so bad that Bowen tried to give Fred tips from the balcony. But Fred didn’t want to listen to him. He thought he had everything under control. Someone else who needed extra help was Derrick. Derrick’s dish was one of the few that could go anyway. Later, the judges came up with two of the best and two of the worst. They said once they tasted Derrick’s dish that should determine where he’s ranked. And so they called down Derrick to taste his dish.

Derrick prepared lobster crudité. The chefs had to cut into the meat to see if it had been cooked properly and what they saw was perfection. Derrick cooked his dish to perfection. It even tasted amazing. It showed the judges that this could be done in forty-five minutes. Something that they all had doubted at first, but in the end, they gave Derrick the Immunity Pin. The judges next announced the bottom three. They called down Fred first. They tasted his dish and they all thought it was horrible. They accused Fred of making Chinese food not Italian food. He was given spaghetti and meats ball. He delivered on a dish that had no connection or appearance to his original dish at all.

The second person in the bottom three tonight had been Willie. This one had been shocking. Willie was given an Asian dish and he instead turned into an Italian dish. If he and Fred had switched dishes, they would have both been better off. And there was no number three in the bottom.

The judges stopped at two and they determined that the person going home tonight was Fred. Next time, listen to Bowen. You kinda brought the elimination on yourself. And yet you will be missed.