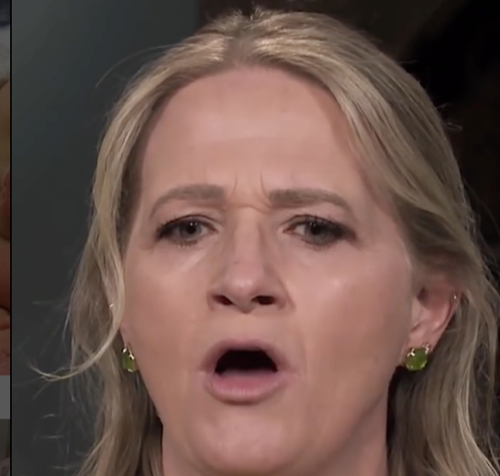 TLC’s reality show about a polygamist family Sister Wives returns tonight with an all-new Sunday, September 25, 2022, season 17 episode 3 called “The Labors of Life,” and we have your weekly Sister Wives recap below. In tonight’s Sister Wives season 17 episode 3 as per the TLC synopsis, “As schools begin to open up, Janelle challenges Kody about getting things back to normal. Then, Christine travels to St. George, Utah, to be with Mykelti as she gives birth, and Meri suffers a devastating loss.”

Tonight’s Sister Wives episode begins in St. George, Utah at Tony & Mykelti’s apartment, Christine is there and it is her and Kody’s anniversary. She doesn’t consider herself married to him anymore. Six weeks ago she told Kody she was leaving and moving back to Utah. Christine is with Mykelti because she is about to have a baby. Before she left, she told Kody she didn’t want anything done for their anniversary.

Kody finally realized that this is serious. But he knows her knew life is not going to be any better than she had. She took off her rings and says it felt so good that it is over. She and Kody never had a legal marriage, it was a spiritual marriage, and there was no contract. This would have been their 27th wedding anniversary. They had a lot of great times and great kids. Sex has been something that has been missing, but intimacy was also gone. Kody says intimacy is trust and he thought she was mad. He wishes he wasn’t as angry. She is sad because she would like to move on faster. She and Kody didn’t see each or talk to each other on their anniversary.

Kody and the sister’s wives get together for a video meeting. Kody thinks Christine is trying to take over the meeting, she has an attitude. He asks Janelle how North Carolina is and she says it is great. Christine tells them about Mykelti and how things are going well, she also has an amazing midwife. Janelle didn’t even know you could have a baby at home before she knew Kody. They talk about COVID and a lot of the kids want to stay doing at-home learning.

Although Ysabel wants to go back to school, she is a senior and she looks forward to it. Kody has made it very clear if any of the kids go to school and he will not see them, because he will not risk getting infected. Aside from Christine not like that, Janelle steps up and says something, she asks Kody when he is going to be going back to normal life. He says when he feels confident that he won’t get it and give it to someone else.

He is not worried about himself. Robyn thinks Kody’s relationship with his kids is more important than COVID right now and she thinks it is really stupid. Kody wants if he is going to visit the kids if they get COVID tested. Kody gets mad at Christine because she didn’t tell Ysabel to get a COVID test. Christine tells him that she is 17 and that she can book her own appointment. The wives are not buying Kody’s excuses, they think he should just go see Ysabel in the backyard if he wanted to see her. Meri doesn’t think Kody understands that all of his kids need him, young or old. Janelle is done with the conversation, everyone agrees and they end it.

Meri is on her way to her mom’s house, she has been having a heart attack for a few days and her goal is to get there. She is in the car and calls Kody, letting him know that she is on her way up there. About an hour after Meri is on the way, her sister calls her and her mom is gone, she didn’t make it. Kody and all the sister wives have fond memories of Meri’s mother. Meri is so traumatized she doesn’t know what to do. She doesn’t know about the rest of her life, what it is going to look like, the B&B because her mother has always been there.

Mykelti is in labor, Robyn can’t be there so Christine is putting her on a conference call because she wanted to be there. Mykelti doesn’t feel comfortable having her father, she is a lot closer to Christine and Robyn, so she wants them to be there. Tony is nervous because of the whole home birth thing.

Twenty-two hours into labor and no baby. Christine says Mykelti is tired. Every time she goes into a contraction Tony is massaging her. Her water broke, so she is progressing. This is a home birth, with no home medication. Mykelti is getting close, it is hard for Robyn to see her in pain. Christine just saw the baby’s head, it is so incredible. Her head is out, but the cord is wrapped around her and her heartbeat is lowering. The baby is born and all is well. Mykelti actually only pushed for ten minutes, she called the baby Avalon Asa Padron.