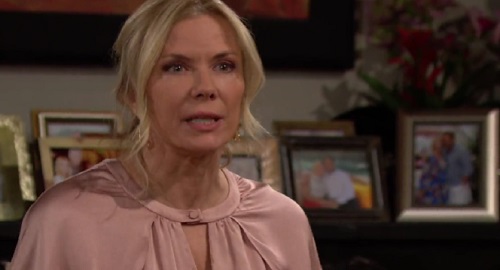 Steffy quizzed Taylor about why she seemed distracted, but Taylor didn’t divulge anything about the Monaco kiss that was on her mind.

At Brooke’s place, Hope Spencer (Annika Noelle) was apologizing over the selfie when Deacon waltzed in. Although Deacon hoped to spend more time with Brooke and Hope before Ridge’s plane landed, Brooke didn’t want to do anything behind her husband’s back.

Deacon noticed that Hope had taken the photo down and assumed it was because of Ridge. Brooke argued that she wanted to show Ridge how dedicated she was, so Deacon couldn’t be there when Ridge got home.

Deacon said the message was received, but he later seemed sad at Forrester Creations. Hope questioned Deacon, who acknowledged that it stings to be rejected.

Deacon just wanted Brooke’s happiness, but he wasn’t sure she’d ever truly have that with Ridge. If there weren’t any residual feelings for Taylor, Deacon wondered why Ridge hadn’t fully recommitted to Brooke by now.

When Ridge showed up at the house with Taylor, Brooke was caught off guard. Ridge and Taylor explained that they were giving Steffy, Finn and the kids some alone time for their homecoming.

After Taylor and Ridge gushed about incredible Monaco, Ridge gave Brooke a kiss – leaving Taylor to look uncomfortable nearby.

There was talk about Steffy’s happy reunion before Brooke gushed over how much she missed her husband. Brooke shared another kiss with Ridge, who then stared at Taylor awkwardly.

At the cliff house, Finn was overwhelmed and emotional to finally be back there. Steffy and Finn shared some warm family moments with Kelly Spencer (Remington Blaire Evans) and Hayes Forrester Finnegan (Cooper and Miles Kilian) as they all enjoyed this sense of normalcy.

Under the sheets, Quinn told Carter they should make a pact, so he confirmed he was in. That left Quinn smiling since she hadn’t even told Carter the pact yet, but he already knew he’d give her whatever she wanted.

Quinn thought they should make it a tradition to play hooky like this once a month. Carter was certainly on board with taking off work to spend the day with Quinn in bed.

After Carter mentioned a conversation with Ridge and how over the moon he was, Quinn suggested talking about him was kind of a buzzkill. Once Quinn said she had a better way to pass the time, she kissed Carter all over and was grateful to have stopped his wedding.