The Bold and the Beautiful Spoilers: Friday, May 13 – Deacon’s Theory Causes Trouble – Sheila Loses It as Steffy Spills Rest of Story

BY Heather Hughes on May 12, 2022 | Comments: Leave Comments
Related : Soap Opera, Spoiler, Television, The Bold and the Beautiful 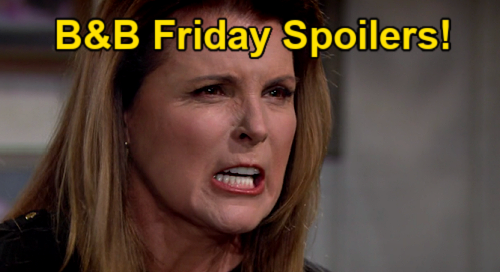 The Bold and the Beautiful (B&B) spoilers for Friday, May 13, tease that Deacon Sharpe’s (Sean Kanan) theory will cause trouble – and Sheila Carter (Kimberlin Brown) will lose it as Steffy Forrester (Jacqueline MacInnes Wood) spills the rest of the story.

At Brooke Forrester’s (Katherine Kelly Lang) place, Deacon has been spreading the word about Sheila’s chance to be in Hayes Forrester Finnegan’s (Piper Harriot) life.

However, it won’t be long until Deacon revisits the topic of Ridge Forrester (Thorsten Kaye) and his lack of loyalty.

Deacon already made things a little tense by slamming Ridge to Brooke and Hope Spencer (Annika Noelle), but he backed off and apologized.

Even so, Deacon just doesn’t have a lot of faith in Ridge and can’t understand his disrespect when it comes to Brooke as well as Hope.

We’ll see Deacon dig his heels in on his opinion of Ridge, so that’ll involve a theory about Ridge’s problematic behavior.

Deacon might act like Ridge used what happened on New Year’s Eve as a reason to turn his back on Brooke.

In reality, Deacon may feel like Ridge was just waiting for an excuse to go running to Taylor Hayes (Krista Allen).

Naturally, Hope may pipe up again to stop Deacon from trashing Ridge.

It isn’t helpful since it only brings tension and makes Brooke defensive, but she may wonder if he’s right deep down.

At the cliff house on Friday’s B&B episode, Steffy will remain livid now that Sheila’s spinning the situation around on her.

Sheila is the one who pumped that bullet in Finn and refused to let Steffy call 911.

If Sheila had it her way, Steffy would’ve died too that night and left Hayes without any parents at all!

As their confrontation escalates, some of things Sheila’s been saying will help jog the rest of Steffy’s memory.

Sheila pointed out that Steffy chased after her, so it’ll finally click for Steffy that she did it because of the Champagne label switch.

Once Sheila’s accused of shoving Brooke off the wagon, she’ll really spiral out of control.

Sheila may end up trying to make a break for it, but Deputy Chief Bradley Baker (Dan Martin) will pop up as part of the plan and make sure that doesn’t happen.

The Bold and the Beautiful spoilers say Sheila can fight this all she wants, but a stint in the slammer is just around the corner!

CDL’s where you want to be for sizzling Bold and the Beautiful spoilers, news and updates, so check back often.