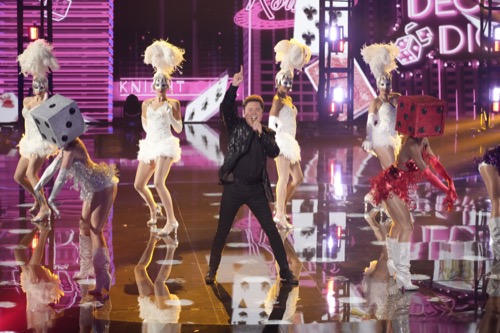 Tonight on FOX The Masked Singer airs with an all-new Wednesday, September 28, 2021, Season 8 episode 2 and we have your The Masked Singer recap below. On tonight’s The Masked Singer season, 8 episode 2 called “Vegas Night,” as per the FOX synopsis, “Viva Las Vegas! Complete with The Blue Man Group and jugglers, the best performers in Sin City visit the show and welcome two new celebrity singers for their first performances of the season. Who will be the King or Queen of the episode?

The Masked Singer returns with everyone wondering who was behind the colorful bird costume. After chanting take it off, the audience learns it’s Chris Kirkpatrick from NSYNC. They all go crazy. The panel didn’t see that coming. Next up, Donny Osmond takes the stage to perform.

The Panther takes the stage next. He is tall, making many think he is an athlete. He shares that he is determined to make a comeback after once rubbing shoulders with stars like Beyonce. After he sings, the crowd goes wild. This is a hard one to guess. His voice is soulful. The panel thinks maybe Brian McKnight, Lamar Odom, maybe one of the Jackson Five.

Pi-Rat introduces himself. Given his clues, he may be a chef or comedian. He chooses to sing an Elton John song. After he sings, Nick Cannon has to help the Pi-Rat who cannot see in his costume. Donny thinks this man knows how to work a room while Pi-Rat is surprised Donny is doing something without his sister. Carrot Top gives a clue. Ken thinks it might be Robert Smiegel. Nicole thinks of Terry Fader. Maybe Jeff Dunham.

The Harp is back this week with her beloved vocals singing a Whitney Houston song. She has the panel standing in seconds. The crowd goes wild. Everyone is now on their feet. They get a clue- she has worked with Nicole before. Nicole thinks maybe Amber Riley. Ashanti is another possibility, Jenny thinks. Robin thinks this could be Yvette Nicole Brown.

Audience voting is now open. Nick declares that the votes are in. Pi-Rat will go home. The panel’s guesses include Jeff Dunham, maybe Dana Carver, or even Carrot Top who shared a clue.s The Pi-Rat reveals himself…its Jeff Dunham!

It’s time for the Battle Royal between the Harp and the Panther. The panel will then decide who will take the crown or get unmasked. The pair both perform. It’s the panther who is headed home, a hard decision for the panel.

The Panther unmasks. It’s a shocker for everyone as it is Montel Jordan. He sings This Is How We Do It to end the show. The audience and panel dance.