BY Heather Hughes on May 14, 2022 | Comments: Leave Comments
Related : Soap Opera, Spoiler, Television, The Young and the Restless 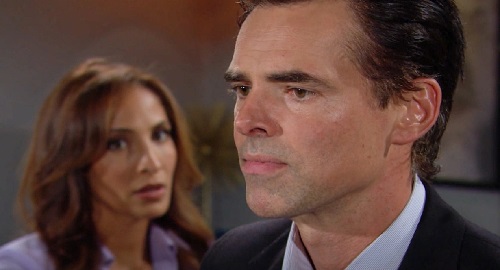 The Young and the Restless (Y&R) spoilers tease that Lily Winters (Christel Khalil) may fire Billy Abbott (Jason Thompson) from a crucial role and let an angry power struggle blow up their relationship.

Y&R fans know Billy’s podcasts have already started to become an issue. Billy has one with his own name as well as an anonymous one called “The Grinning Soul,” but his plan isn’t working out very well.

The whole point of creating the second podcast was so Billy could speak freely. Billy felt he was censoring himself too much on his main podcast, so he hoped to avoid that with this expansion.

However, it didn’t take Victoria Newman (Amelia Heinle) long at all to figure out Billy was “The Grinning Soul” and slam him for using Ashland Locke (Robert Newman) as podcast fodder. From where Victoria’s standing, Billy used her personal drama in a public way for the sake of his own ego.

Lily has already offered a warning since she knows Billy values his work on these podcasts. Although Lily doesn’t want to yank them away from Billy, she may have to at some point.

Lily admitted she’d hate to see Billy lose his platform by being careless, but careless is Billy’s middle name! If Lily is expecting Billy to be responsible, she’s dating the wrong person. This new-and-improved Billy only goes so far.

That brings us to the week of May 23-27 and Lily’s attempt to lay down the law. Lily will try to set more boundaries and convince Billy to follow the rules that are in place for his own good.

How much do you want to bet that Billy ignores those rules and does what he wants anyway? This could lead to major trouble if Billy pushes Lily too far. Lily may have to pull rank and throw Billy off the podcasts he’s come to care about so much.

There may be a power struggle that highlights how inferior Billy feels, especially since he’s an outsider while Lily and her family carry out their merger dreams. This is definitely the kind of thing that could cause a serious relationship setback.

Will Lily have no choice but to fire Billy from his podcasts? Will Billy’s response add to the conflict and put their romance in jeopardy?