The Bold and the Beautiful Spoilers: Deacon Sniffs A Con – Sheila Unwilling To Reveal Bill Secret 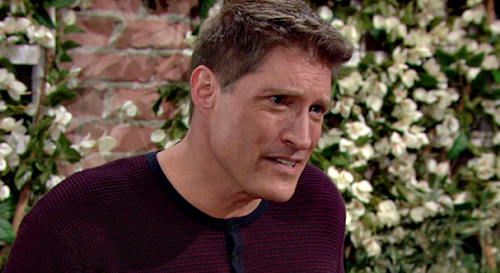 The Bold and the Beautiful spoilers document that Sheila Carter (Kimberlin Brown) had to see Deacon Sharpe (Sean Kanan). When she did the viewers again saw the genuine feelings both characters have for each other.

Deacon questioned how Sheila convinced Bill Spencer (Don Diamont) to back her. She initially did not want to provide details.

Some find it intriguing and believable, assuming Sheila has drugged Bill, has some otherworldly control of his mind, or is simply taking advantage of his apparent severe depression.

Others feel, regardless of the intention, that it is not believable.

Bold And The Beautiful Spoilers – Giving Sheila Carter A Chance

It is too soon to dismiss TPTB efforts. B&B’s writing staff is making a bold move, with a wink at the use of the adjective bold that is part of this longtime soap opera’s title.

Sheila is more than the reigning B&B villain. She ranks with the greatest bad guys and ladies in daytime history.

Writing Dollar Bill into an alliance with her is a recipe for intended audience provocation.

Brown’s character represents the decision-makers to a certain extent.

Just as she anticipated a firestorm response from the characters who populate her world in this version of Los Angeles, California, so did those who green-lit this storyline expect a wide variety of intense reactions.

Bold And The Beautiful Spoilers – Deacon Sharpe At A Loss

Deacon is trying to determine how Sheila convinced someone like Bill to manipulate the legal system to her advantage.

Kanan’s character understands that Mike Guthrie (Ken Hanes) took the fall because he has a soft spot in his heart for Sheila and also is not that bright.

But Bill is a different animal entirely. He is a megalomaniac, as Deacon described him. So, why would he choose to help Sheila?

Deacon understands how Sheila benefits from Bill’s help. But he does not understand why Diamont’s character would single her out.

Deacon does not get Bill’s angle. Like the viewers, he is not yet allowed to know the details.

Bold And The Beautiful Spoilers – A Long-term Payoff Is Needed

It is fair to critique the unlikely or even impossible nature of Sheila and Bill falling in love.

But hardcore viewers know that Bill is demonstrating the symptoms of a mental breakdown.

Whatever the eventual explanation open-minded soap fans, who enjoy a fun ride that is not supposed to be realistic, will accept a wild storyline.

But that tale must have an endgame that delivers a satisfying outcome on B&B.