Britney Spears’ Slams Her Haters, Her Ex & The Liars On Her Twitter 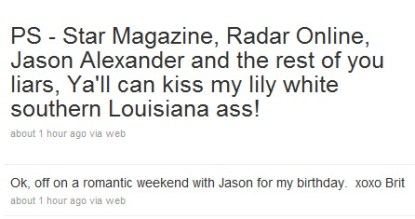 Ya gotta love her – Britney Spears took to her twitter to send th F!*! you message above to her haters, her ex Jason Alexander, Star Magazine and Radaronline.   Yesterday Star Magazine had her on the over with an interview with Jason Alexander, Britney’s ex.  Where he claimed Britney’s current boyfriend Jason Trawick was abusing her.  Furthermore there was an audio released which was said to have been Britney speaking to Jason making the accusations.  Britney claims the interview is a lie and the audio is not her.  Britney’s lawyer is threatening to sue the pants off everyone involved.

Britney is standing by her man and leaving on a romantic weekend with Jason for her birthday.   If the interview and the audio are fake I hope she sues their lily white asses off LOL!