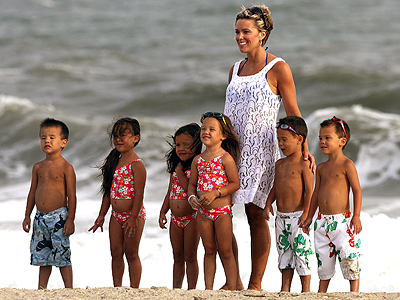 Jon Gosselin did not want his children to go to Australia with his ex-wife Kate Gosselin.  Jon even went as far as to go to Berks County Court in Pennsylvania to stop the trip.  However, a judge ruled because the trip was work related – they were filming for Kate’s new show Kate Plus 8 he allowed the trip regardless of Jon’s objections.

Radaronline has more:  “It was another slap in the face for Jon because he did not want the kids to go to Australia.  But the judge ruled that because it was for work it was okay. Jon had plans to get together with his kids and friends for New Year , but now he will not see them until they return in the middle of January.”

“He was scheduled to have them this weekend, but there was nothing he could do as the decision was taken out of his hands.  Kate told Jon about the trip, and when he did not agree it was decided that the judge should intervene and the ruling went in her favor.”

I cannot say I am a huge fan of Jon Gosselin but in this case I would have to agree the children should have the chance to see their father over the holidays and not be 1000’s of miles away.