Oksana Grigorieva’s ‘You only got me $15 million’ Lawyer, Eric George, Moves Against her 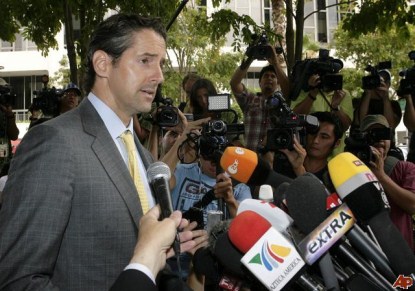 The lawyer who got Oksana Grigorieva a $15 million dollar settlement wants to speak against her to the L.A. County Sheriff’s Department.  Eric George claims that Oksana has waived her attorney-client privacy privilege but her current lawyer, Daniel Horowitz says that is not true and that if George speaks to sheriffs about the Mel-Oksana case then he will be sued.

The battle between the two lawyers has been on since Horowitz accused George of leaking information that only George could have had from Oksana and George responded by threatening to sue Horowitz for defamation.  Of course George is in the right here – if Horowitz is in possession of the same info as George then he could have leaked it or sold it just as easily as George!

Via TMZ:  Horowitz emailed back on November 20, “You do not have permission to waive or disclose any privileged matters.” And then Horowitz threatened, “If you unilaterally waive privilege as you seem to intend to do, you must take full responsibility for those choices.  Nothing that we have said or done authorizes you to do this.”

What is it that Oksana is desperately trying to hide from the Sheriffs?

We already know that Oksana is a money hungry snake who has tried to frame and blackmail Mel – did she admit this to George?  Is that why he quit being her lawyer?  Is that what he wants to tell the Sheriffs?  We think so.