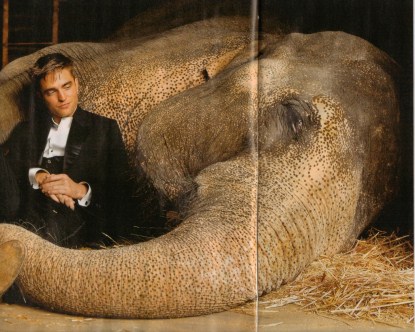 Water For Elephants star Robert Pattinson, 24, who plays Jacob in the movie has a new leading lady.   Calm down everyone- it is Rosie the elephant – Robert and Kristen are still good.   This is a picture from the movie in the new issue of Entertainment Weekly .

In the movie Robert  plays Jacob Jankowski, a veterinary student who after a tragic incident in his life gets a job at a circus taking care of the animals.  Reese Witherspoon plays Merlena a circus performer who is married.   Merlena is forced to choose between Jacob and her husband.  The movie is set to be released April 2011 and also stars Hal Holbrook & Christoph Waltz.