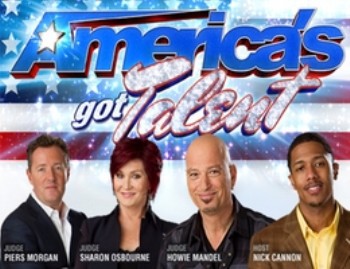 Welcome to the recap of America’s Got Talent – tonight’s episode is brought to you by Rosie over at Fit Fab Celeb.  If you missed last week’s episodes, you can catch them here. Before we begin tonight’s recap, we must first make honorary mention of our favorite act last week, 22-year old, singer Dani Shay (looking amazingly like Justin Bieber) doing a parody of Justin Bieber.   Check out the video and tell us what you think…

We are back in the Emerald City, last time the talent was hot – will it be the same tonight? Our first act tonight is 46-year old, Brian Jackson who will attempt a world record that the judges will never forget. He blows up British Standard water bottles. Pierce is the first to dish out an X buzzer, thank God – this guy is so boring and looks like he is going to have a heart attack after 90 seconds. Pierce called it one of the mos pointless things he had ever seen in his life, no trip to Vegas for him.

Meanwhile, many other acts continue to get the ax; Buffo the Comedian, Kimo – Madona 20 years in 20 minutes and Robo the Robot.

Next up is Geechy Guy, a Stand Up Comic. He was funny, but they are one liners and nothing flows. Howie liked it, the audience love it – Pierce didn’t but Sharon did! It’s off to Vegas.

More acts are off to Vegas: Illumni Men’s Chorale, 20, year old Soleil the Pole Dancer who learned how to pole dance in a Fire Department, Seth Grabel – Acrobatic Musician. Sadly, the Chihuahua Pool Shark didn’t make it through.

Brandon, Justin and Josh -The BGP singing group. I loved them, their rendition of Benny and The Jets was fantastic! Sharon would have liked for them to have made it more their own. Pierce feels they are talented, he liked it. Howie thought it was great. Howie, Sharon and Pierce give them all yes, it’s off to Vegas for BGP.

The Art of Techniques, three kids age 7 to 10, dancing hip hop. Howie thought they had skill. Pierce said they were absolutely brilliant. Sharon loved it, she thought they were fantastic. It’s a ticket to Vegas for these guys!

55-year old Realtor from Denver Colorado, Marylee who writes and sing songs for people who are deceased. She sings a special song that she wrote for Pierce. She gets a standing ovation by his royal grumpiness, Pierce. But, it’s no ticket to Vegas for her.

Come back next Tuesday, for the surprise of the summer – there’s a little girl that’s going to kill it on stage!