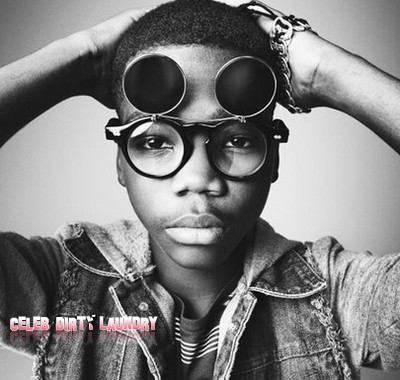 On last week’s results show Brian ‘Astro’ Bradley found himself in the bottom two, too say he was not pleased is an understatement.  When Astro came back to perform after hearing the news, he behaved belligerent and like a spoiled brat.  He got so out of hand Simon Cowell had to have a word with him.  See the video of his lackluster bottom two performance below.

Regardless of how young he is the way he behaved was unacceptable, a real diva.  People were not pleased with his entitled behavior and with the next show a couple of days away someone told Astro, time to do damage control.  Below is an apology/explanation Astro posted to his fans on facebook.

Astro’s facebook: What I do, I do for the love of Hip-Hop and my fans, and I would never doing anything to hurt either. But please try to understand where my head was last night. Muhammed Ali was hated by America when he didn’t enter the draft. What people didn’t know was that he would have entered if the recruiter would have addressed him by his new name. I believed I was being mistreated, and in the moment I thought about Ali’s moment. I want to be the new ambassador for Hip-Hop and a leader of a new young movement of positive kids, but to be that I must have Integrity and Honor first! People are saying I’m “cocky” and “arrogant”, well maybe I have watched too many Muhammed Ali films or maybe I grew up having to fight my way home everyday or battle on street corners of Brooklyn for respect. My guards are always up, and maybe I took the situation too heavy. I seriously apologize to my fans, what I said and my emotions weren’t directed toward you. I’m 15 and I think I know everything, but the truth is, I don’t, and I handled the situation wrong! Win or lose next week, I will make you all proud!

Do you buy his apology?   I guess the important thing about making a mistake is learning from them.   Do you think Astro will make it another week on The X Factor?