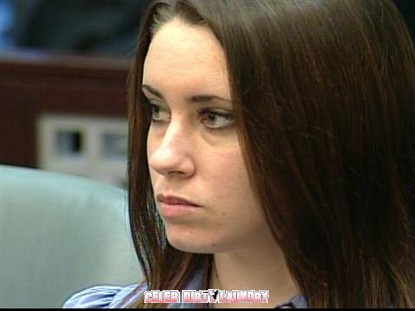 The prosecution is all done presenting its strong case aghast Casey Anthony – showing, amongst other crimes, that she is guilty of murdering her young child. Now the defense begins presenting its case Thursday morning in the murder trial in central Florida, and the big question remains: Will Casey take the stand in her own defense?

Yesterday we reported that renowned prosecutor Danette Meyers of Los Angeles said that after seeing the evidence presented against Casey that her only slight hope remained in taking the stand in he own defense.

The prosecution rested its case only minutes after court began on Wednesday after presenting 70 witnesses over 19 days.

After the prosecution wrapped up, the defense filed an obligatory motion asking Judge Belvin Perry to throw the case out of court, saying the prosecution had failed to prove its case; the judge denied the motion.

The Orlando, Florida woman, 25, is accused of murdering her 2-and-a-half year old daughter Caylee, who seemed to vanish in the summer of 2008. Caylee’s disappearance quickly captivated the country, and six months later – in December, 2008 – her body was found in a wooded area.

The prosecution maintains that Casey suffocated the child with duct tape. The defense dropped a bombshell during its opening arguments, claiming that Caylee was not murdered, but rather accidentally drowned in the family’s swimming pool, and that Casey’s father, George Anthony, hid the body in an attempt to cover it up. This would seem odd since Casey’s mom, who is George’s live-in wife was asking to see her granddaughter for a month following her disappearance and Casey was making all sorts of excuses.

Casey has been charged with seven felony counts, including first degree murder, aggravated child abuse and misleading the police in the death of Caylee.

If she is convicted of first degree murder, she could be sentenced to death by the seven-woman, five-man jury.