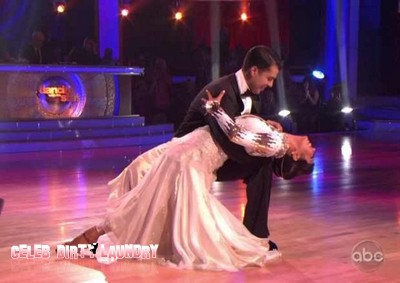 Rob Kardashian chose to perform the Waltz as a dance style he has not yet performed.   On tonight’s tenth episode and the part one of the finals of Dancing With The Stars couples will have to impress the audiences with two routines.  If you missed tonight’s performance show you can read our official recap here!  If you missed JR’s performance of last week you can see the video of it here!

Rob who oddsmakers are giving a 4/1 odds to win said he feels great going into the finals. Cheryl said about Rob, ‘he wants to go all out for this. We live, we eat, we breathe this competition.’  Rob said his partner Cheryl Burke will choreograph a routine that fits his personality — probably ‘old soul.’  Bruno came to give Rob some tips before his performance and he thinks Rob has the potential to win.

Judges comments –  Bruno said:  You were flowing and you were glowing.  You messed up a little bit of the footwork.  It was very good.  Carrie Ann said: You are the male version of Cinderella.  Tonight it is fluid and flowy, wow.  Len said:  You had good holds and good posture.  It was simple, but simply beautiful!

Check out the video below of his Waltz performance and let us know what you think?  Do you think he will be in the final two?  Does he have a chance to win the Mirror Ball Trophy?  Sound out in the comments below!