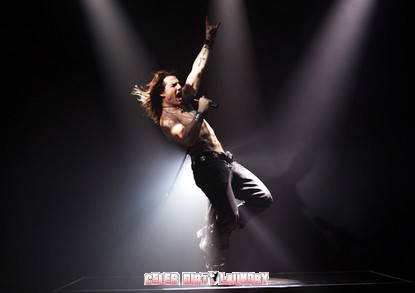 Here is your first look of Tom Cruise as a womanizing rocker in Adam Shankman’s big-screen adaptation of the Tony-nominated Broadway musical Rock of Age. A picture of a long-haired, shirtless Tom Cruise performing Def Leppard’s Pour Some Sugar On Me has been posted on Twitter by Rock Of Ages director Adam Shankman.

Tom plays rock star Stacee Jaxx in the movie an aging musician whose glory days are long past.  Shankman has previously tweeted photos of Russell Brand and Alec Baldwin in character from the set.  Paul Giamatti, Russell Brand, Alec Baldwin and Catherine Zeta-Jones also star in the film Rock of Ages  and it is set for a June 2012 release.  What do you think?  Will you go see the movie?