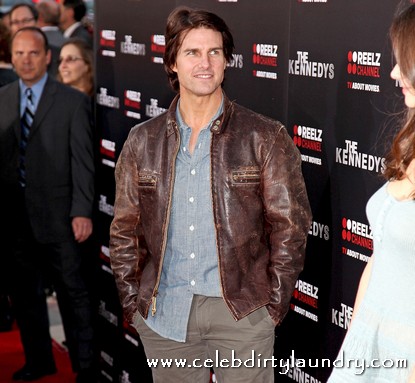 Tom Cruise is getting ready to play the gyrating front man of an 80’s glam rock band in the film version of Broadway musical Rock Of Ages.  And what better way to prepare than to study with the teacher of Guns n’ Roses star Axl Rose?

Director Adam Shankman is very impressed with Tom’s work ethic saying: “He’s been studying with – seriously – Axl Rose’s voice teacher like five hours a day.”   “The prognosis is more than excellent.”  He added: “I think we’re going to see him, every drop, the rock ‘n’ roll god!

“I’m very excited.  He’s so committed to doing it.”   “He’s pouring himself in this part in a way I’ve never had an actor do.  It’s pretty intense.”   “Between the voice lessons, the incredible study – researching the period, it’s like 1987, just going there!”

To really get to feel like an 80’s rock star Tom will also need to take some recreational drugs – but for scientologists that is a strict no-no.