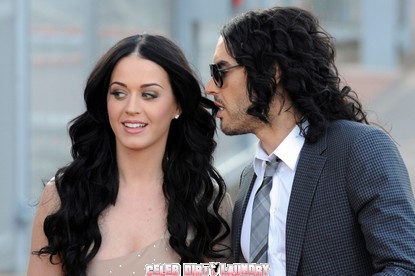 Entertainment must be bred in the bone of Katy Perry – her folks are big-time evangelist preachers making their way condemning (but still praying for and loving) Katy and husband Russell Brand and their evil ways. Keith and Mary Hudson are professional preachers on the evangelical church circuit and do not hesitate to capitalize on their all-star daughter and her famous husband. From the perspective of evangelical Christianity Katy Perry and Russell Brand provide lots and lots of material to rant about.

For an hour, Keith Hudson has been pacing around the sanctuary of the Kings Road Church on the outskirts of London. He has been telling the congregation his story — that Satan has lured his daughter away, that she has fallen. But that he must love her anyway – must pray for her. But then he stops short, ready to unleash his big pitch. With tears in his eyes, hollering at the top of his voice, he delivers his keynote with as much bombast as he can muster: “I kissed God — and I liked it!” Hold on a minute.   Isn’t that a pop song? Who’d this guy steal that line from?   His daughter, Katy Perry – who, unfortunately, thanks to her massively successful career and husband, is most certainly going to hell.

Except for a circuit of evangelical churches, not many people cared about the Hudsons. Until four years ago when their controversial daughter became an overnight sensation with that song, “I Kissed a Girl,” and Keith and Mary Hudson suddenly hit heavenly paydirt, touring on a circuit that took them to eight countries last year and even a date in the Poconos next month.

While publicly declaring concern over their wayward daughter – she is, they candidly admit, destined for hell – they brazenly use her fame for their own ends. Their services repeatedly mention Perry and her husband, Russell Brand, the English comic with a lurid past of drug addiction and rampant promiscuity. In his London sermon, it’s an odd mix of boastful exhilaration (“Anyone here heard of Russell Brand?   He’s my son in law.    I love Russell.   He’s a wonderful man.”) and overwrought condescension (“We pray for him — pray for the entertainers.”).

To those who have witnessed Keith’s ministry in the past three years, it is a familiar story. Since Katy hit the big time he and Mary have spoken of little else. Yet despite their disapproval, they turn up at her shows — walk the red carpet at awards ceremonies and never tire of boasting about their celebrity connections.

At the time of Katy Perry’s start, her parents were disgusted, with her mother declaring: “We cannot cut her out of our lives as she is our child, but she knows we disagree strongly with what she is doing and the message she is promoting regarding homosexuality, which the Bible clearly states is a sin.”

While the Hudsons do not generally request a fee for their appearances, they’re happy to sell their books, and like their other missionary work, whenever the Hudsons show up to preach, they’re able to declare all of their travel expenses as part of their tax-deductible missionary work. “They were coming to their daughter’s concert in London and rang up to say they’d like to preach at our church,” he says. “They turned up 10 minutes before the service began and just jumped up and got on with it. To be quite honest, one or two people in our church didn’t take to them. They felt these people were cashing in on their daughter’s fame. But a lot of young people turned up because of the Katy Perry connection and five of them made a fresh commitment to God that day.”