Paris Hilton Looks Amazing On The Cover of Mega Magazine 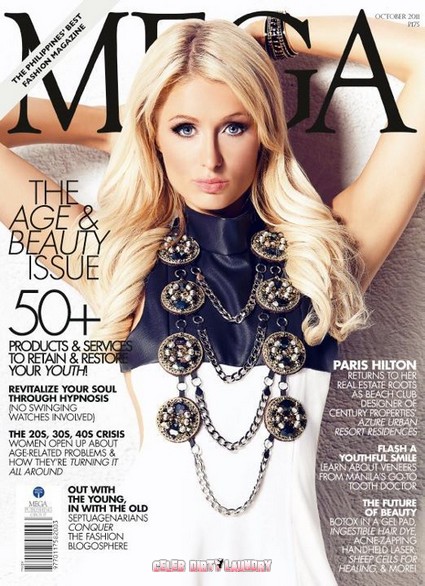 Paris Hilton graces the cover of the October print issue of Mega Magazine, ‘The Philippines Best Fashion Magazine.’  Mega Magazine, with both online  and print versions, features Paris in their special October Age & Beauty Issue. Paris looks simply gorgeous on this cover – which was shot by Raymund Isaac and styled by Angela Alarcon.  Paris wears a black and white and chiffon mullet dress by Gio Dimalanta and an embellished necklace from Chris Diaz at Myth.

Paris, who has traveled the globe all summer pursuing her broad range of business interests, spoke to the magazine about her real-estate venture in the Philippines in partnership with Century Properties’ Azure Resort Residences Beach Club.

More: Paris Hilton Poses With Her Youngest Fans At Her New Store In India

It is no surprise that the top fashion mag in the Philippines would feature Paris as she certainly scored a major popular success there – bringing out so much mutual love from Filipinos – as she made her entry into her family’s traditional business, real-estate.  Paris also launched a new Paris Hilton Handbags and Accessories store at the SM Megamall in Manila, her fourth shop in the country.

More: Paris Hilton Looks Like A Princess In A Swarovski Sari

It is really nice to see a mega-star like Paris Hilton take such an active interest in the Asian world. With Paris’ recent high-profile business trips to both the Philippines and India she is making serious inroads into markets often neglected by Western celebrities.