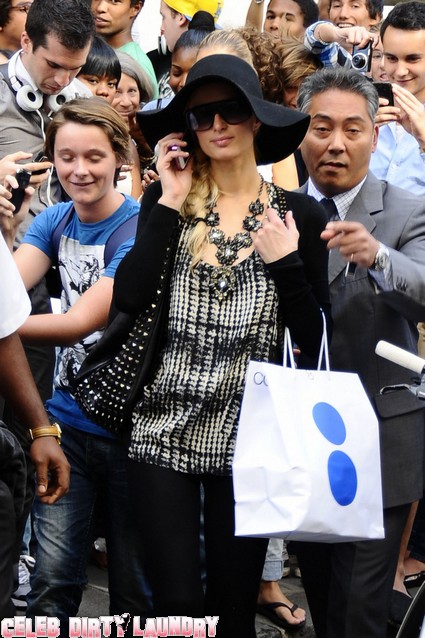 Paris Hilton takes Paris, France!  Paris greeted fans while shopping in France today August 30th, 2011. Paris went shopping at the famous shop “Colette”  and appeared to be interested in finding a camera.  Paris tweeted on her twitter account: “Had an amazing shoot! Now it’s time for some shopping in Paris. Must go to my favorite stores Colette, Montaigne Market & Chanel. :)”

Paris seems to be having a great time in France she was doing a fashion shoot today and tweeted:“Had an amazing shoot! Now it’s time for some shopping in Paris. Must go to my favorite stores Colette, Montaigne Market & Chanel. :)”

Paris is in France after going to her friend Petra Ecclestones wedding in Italy with her mother Kathy Hilton and sister and Nicky Hilton.  We caught up with Paris indulging  in some retail therapy in Rome at Dolce and Gabanna with her sister and Fergie of the Black Eyed Peas.  Fergie was in Rome to perform at Petra’s wedding.

Paris Hilton At The Airport in France With DJ Afrojack – Photos

Paris Hilton Dazzles at the Wedding of Petra Ecclestone – Photos

Click on the thumbnails below to enlarge ots of pics of Paris in France!