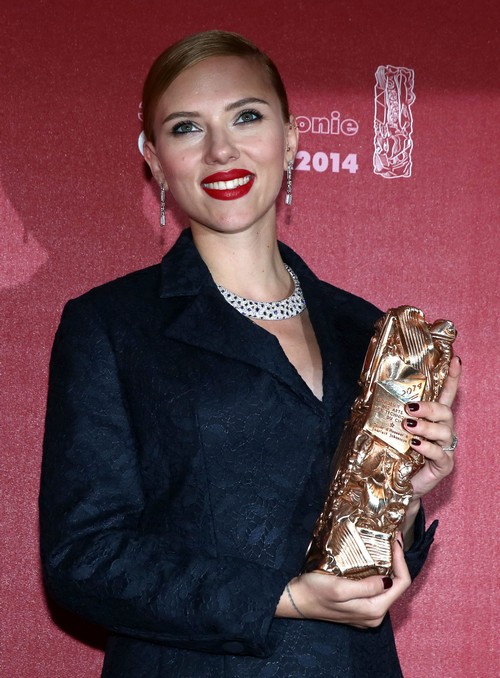 Scarlett Johansson is fastidious about keeping her personal life private but also loves showing off her naked body in public – go figure.  As Celeb Dirty Laundry reported earlier Scarlett has a topless spread accompanying her interview on ‘Interview’ magazine, hardly in keeping with claim to adoring privacy.

The 27-year-old Scarlett says she is determined to keep certain things in her life secret from the public – not her body we assume – and has made a decision to avoid social media sites to maintain her stance.

Speaking to Huffington Post founder Arianna Huffington for Interview magazine, she said: “I don’t have a Facebook or a twitter account, and I don’t know how I feel about this idea of, `Now, I’m eating dinner, and I want everyone to know that I’m having dinner at this time,’ or `I just mailed a letter and dropped off my kids.’ That, to me, is a very strange phenomenon. I can’t think of anything I’d rather do less than have to continuously share details of my everyday life.”

Well Scarlett, lots of us folks would find it even stranger to pose undressed for publicly displayed pics – so perhaps it is you who displays the strange phenomena – talking about dinner is not that personal after all.

Scarlett claims to be shocked by how many of her acting contemporaries choose to share so much of their lives via social media. She added: “I guess they use it in a way that works for them. But I’d rather that people had less access to my personal life. If I could keep it that way, I’d be a happy lady.” Scarlett needs to study the meaning of the words personal and naked – and learn to distinguish their similarities and differences.

Scarlett took legal action earlier this year after nude photos of her emerged online – in fact they were displayed on our site first! Now she poses for nudes for magazines and at the same time blabs on about how much she loves her privacy – I guess there is a good explanation for all of this but I just can’t figure it out.