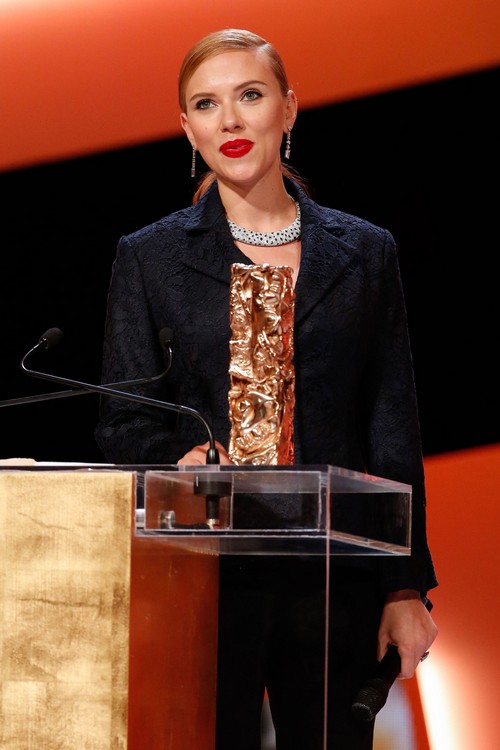 Scarlett Johansson must be the most disgusting hypocrite of all time. Scarlett bitched and moaned – she even went to the FBI – when some nude photos she snapped of herself were allegedly hacked from her cell phone and displayed on the Internet. Well guess what? Now Scar Jo, the genius, has decided to pose topless for all to see in an interview with ‘Interview’ magazine.

Celeb Dirty Laundry was the first website to have the pictures up and was interviewed on Access Hollywood and featured on The Soup as a result of the scoop!

The FBI arrested the man allegedly responsible for hacking and leaking the nude pics, Christopher Chaney, and he could face up to 121 years in federal prison. Imagine doing time for stealing pics that show what Scar Jo has now made available for all the world to see,
Scarlett previously babbled nonsense about her exposure In an interview with Vanity Fair: “I know my best angles,” she says with her trademark insouciance. “They were sent to my husband,” now ex Ryan Reynolds. “There’s nothing wrong with that. It’s not like I was shooting a porno.” She adds saucily, “Although there’s nothing wrong with that either.”

Scarlett has also said – when putting down social media: “I don’t have a Facebook or a Twitter account, I can’t think of anything I’d rather do less than have to continuously share details of my everyday life.”

Scarlett apparently prefers to share details of her anatomy by posing topless in magazines. We truly hope that the phony hypocrite doesn’t call the FBI on ‘Interview’ mag.